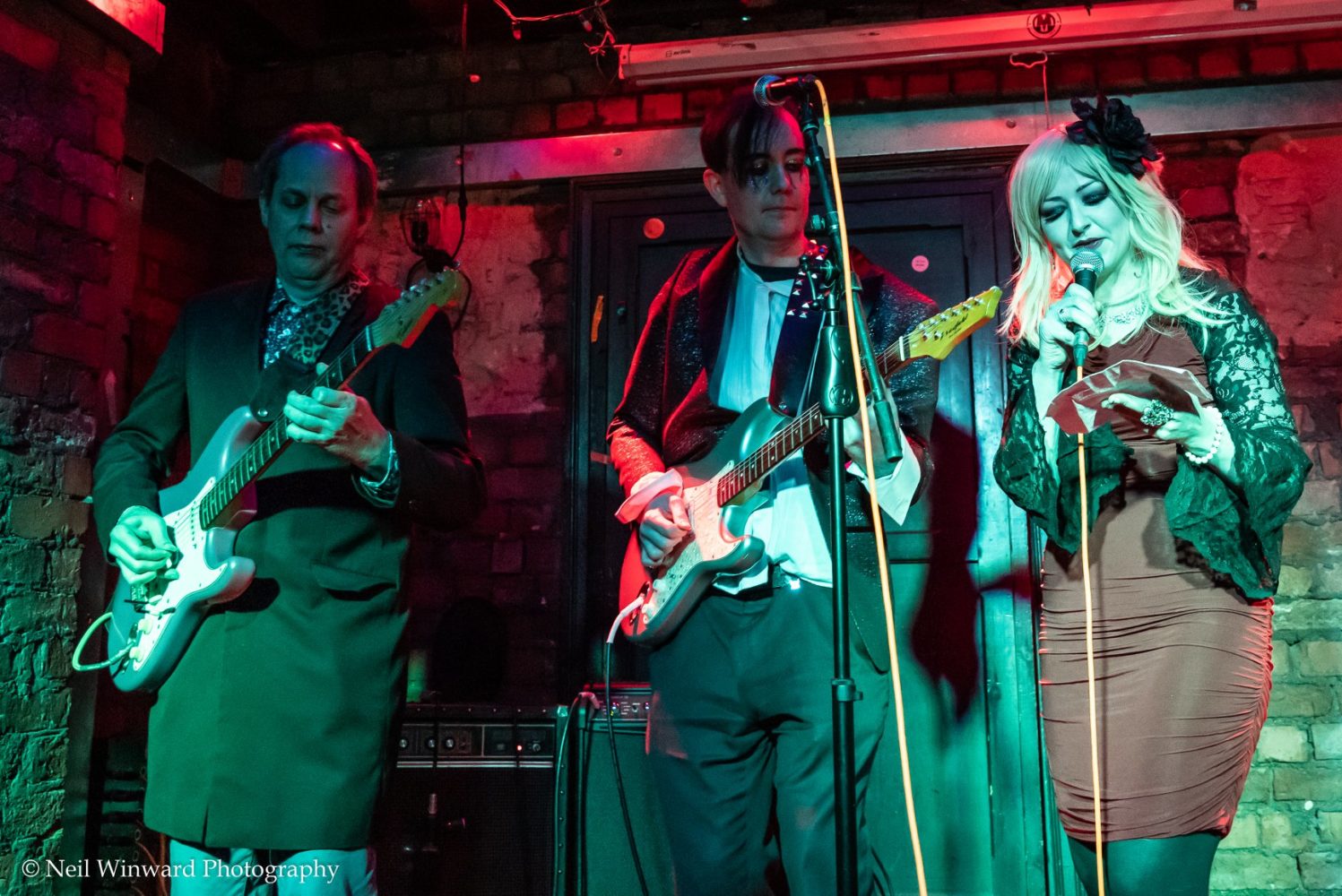 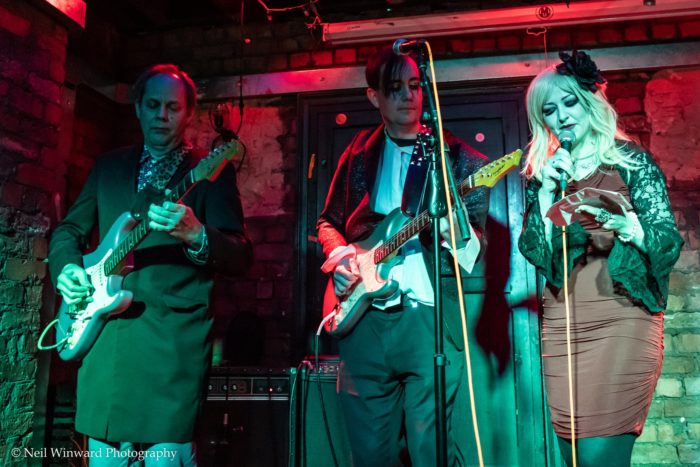 Weimar’s double A-side is available in physical format via Weimar’s own label Marlene’s Hat, and digitally by German Shepherd Records – combining crafted songwriting with exploratory, gripping guitars, layered with a lingering jangle. A gig setting however, provides an extended test of any band and their new material: but all artists involved (including those who came to support with members of Four Candles, Bobbie Peru, Vieon, Factory Acts, ILL, Trianglecuts, Springfield Elementary and Rose & The Diamond Hand, just to name a few, all in the crowd) emphasized the conductive creativity of the local grassroots, the communal strength and the levels of talent within it. 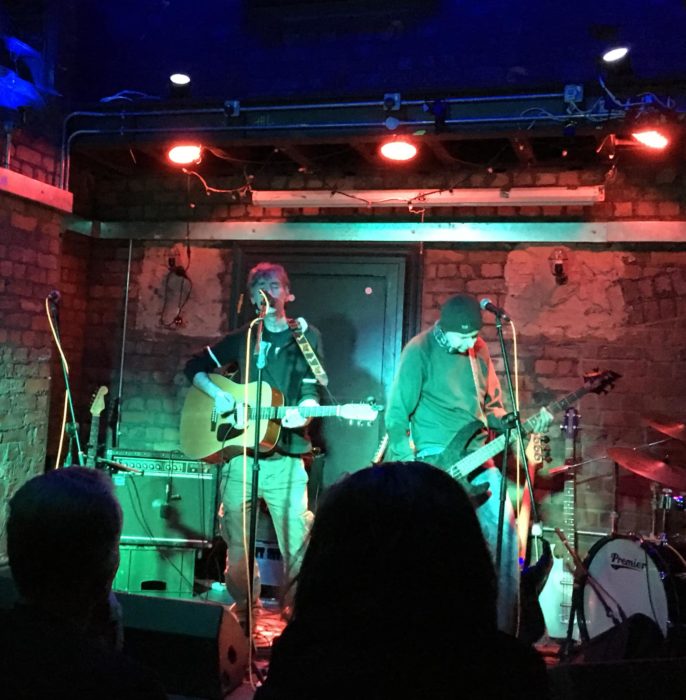 First on stage was Dominic Carlton Jones, who arrested the audience with insightful lyrics and visceral acoustic guitar playing– delivering an infusion of felt sensation and sound, underpinned by skilled bass from Danny Needham, which fell with well-worked emphasis. These were the type of tracks attuned to emotion, where the words grip with every chord, magnified by the high-ceilinged performance space; an ideal example of artist and architecture in artful harmony. It is evident that Dominic is a talented singer-songwriter and musician, managing to channel the energy of the already packed place into an impressive shared sense of captivation, but in a way that was brilliantly human – with themes of life, death, love and loss, all encountered.

Geneviève L. Walsh followed, a writer, poet and performer who is the host of Spoken Weird and co-host of Stirred, with a collection The Dance of a Thousand Losers published by Flapjack Press in 2017. Geneviève certainly emphasized the importance of having room for poetry and spoken-word in a gig setting, bringing a well-balanced combination of socially-savvy narrative, heartfelt humour and drippingly dark irony to the stage. Her pieces encountered subjects from terrible house parties to the mundane routines ‘expected’ by urban life; highlighting an evidently artful eye for detail, which was then combined with a bold and unabashed delivery. It is refreshing to see a poet and performer who rather than lets the sound of their words impress the audience, delivers deft wordsmithery weighted with feeling and a ripe dose of reality – and two fingers in the face of pretence. 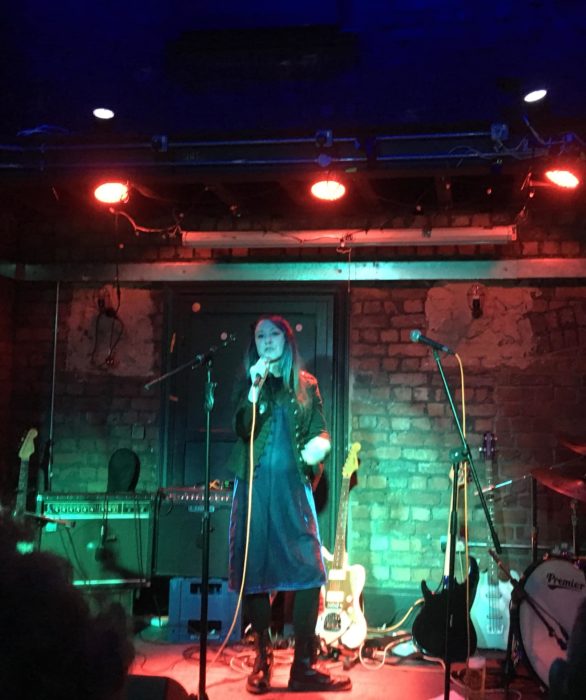 I was definitely enjoying the Gothic-infused theme of the night too, something which was rather evident when Sticky Pearls, a duo from the North East, took to the stage. They are Sarah Parilla (vocals) and Graeme Wilkinson (guitar, bass, keyboards and drum programming), surprising in their sonic force and how heavy yet expressive lashes of guitar underpin Sarah’s impressive voice. It is so commonplace in live sets these days to see bands bolster through a series of tracks in a kind of hectic cycle, but Sticky Pearls provided a much needed antidote to that – developing mood, textures and a moving, majestic momentum which infused the fuzz of shoegaze with the spiralling sensations of Gothic rock. Arresting to watch and allowing for an utterly intense listen, I particularly loved the thoughtful, finger-felt flourishes of bass beneath the building darkness of the track ‘Germs’. Like diving into a dark dream and meandering through the music of the mind, this was sound tempting to be lost within. I’m looking forward to hearing more. 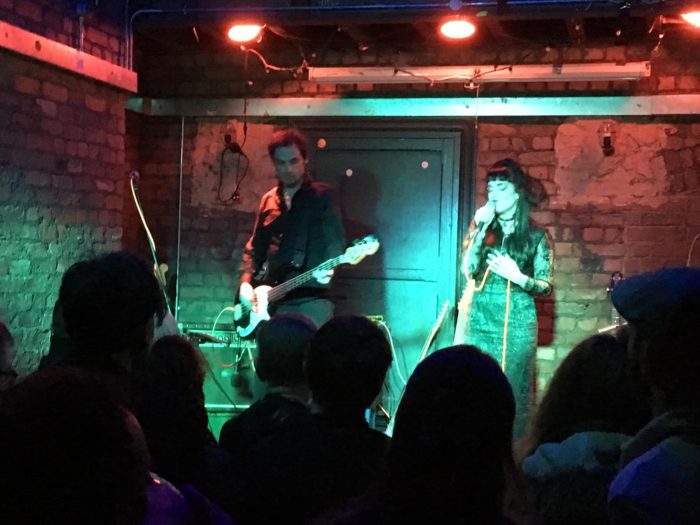 This indeed was an evening where the atmosphere had been artfully channelled, Weimar taking to the stage in a room which was wonderfully packed – The Eagle offering an intimate space which is special in a gig context (no wonder it’s part of Independent Venues Week 2019). And Weimar were certainly special too, with searing guitar sending their signature combination of story-telling-meets-songwriting to the fore. What makes Weimar stand out from so many other guitar bands is their emphatic execution of highly observant songs informed by life’s surreal and unnerving experiences, underpinned by instrumentation which is accomplished – almost oblivious to how good it actually is. Guitars jangle, jolt and drive emotion in equal measure, matched with point-hitting drums… with enigmatic singer and musician Aidan Cross captivating the crowd. His vocals are wired with wistful and yet mysterious voltage, telling stories at their enchanting, emotive best. We hear this in ‘John Doe’, which is cried out in the track of the same name, telling of themes of craving, searching and putting our hope in others. 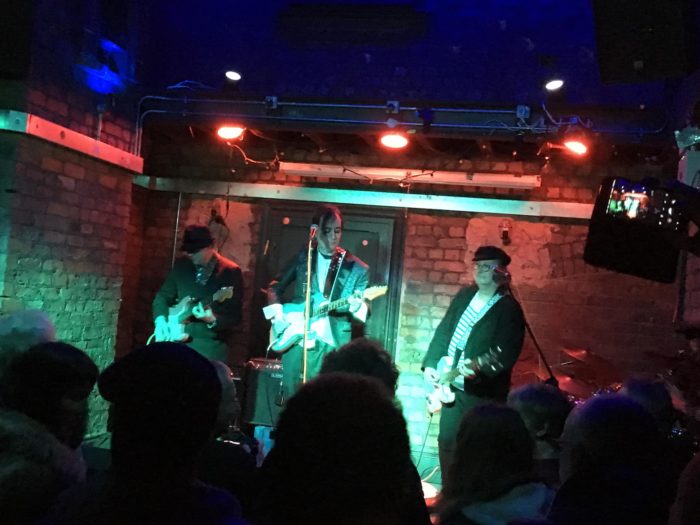 A key highlight of Weimar’s notable hour-long set was a guest appearance from musician and artist Rose Niland, who provided additional vocals – the beautiful, billowing arc of her voice and range adding to the intensity unfolding, especially on ‘Marvel to the State’, set to be Weimar’s next single. From songs about the war to a trip through the film-noir tinged ‘Nights in Spanish Harlem’, this was a set which surged with imagination and charge. It is crucially interesting – a word which is often not applied to the current deluge of guitar bands at current. Crafted, creative songwriting was after all underlined on Weimar’s performance of the second single – to an anthemic reaction – ‘Curse The Songs’; crying out against those musical icons who seem to swing to the right in their old age. The audience were swirling and swaying, there was a sea of hair toward the back of the room, the band clearly were enjoying themselves. We even went out with an encore.

Weimar underline what is to open up the interesting side of alternative music and combine cultural reference, historical depth and deft musicianship with evocative delivery. Be sure to made them a band you see perform live in 2019. 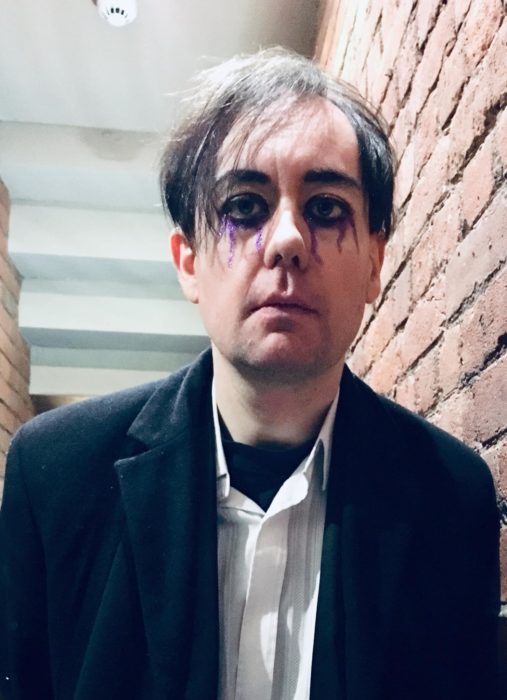