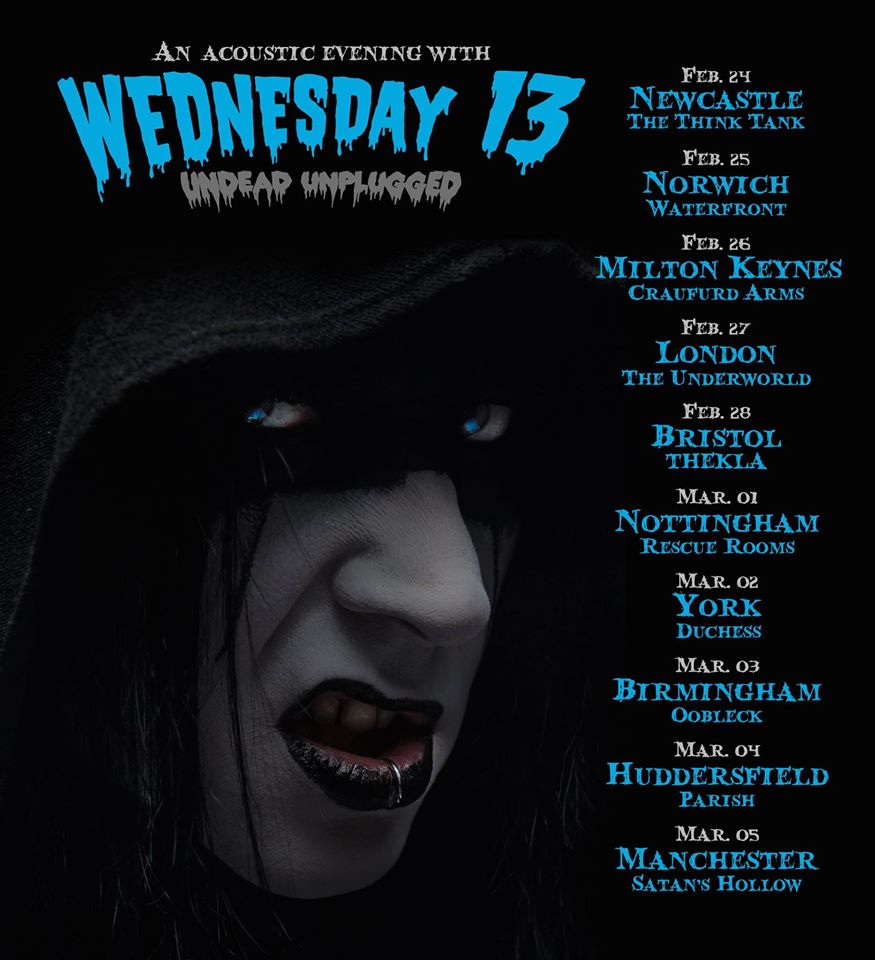 Wednesday 13 returned to Manchester on Saturday night for an intimate acoustic performance with fellow band member Roman Surman on the final night of their The Undead Unplugged Tour. Nigel Carr was there for Louder Than War and reports back below.

Satan’s Hollow sits just on the East Side of Manchester between the gay lights of Canal Street and the Chinese arch of, ahem.., China Town. You enter down a dark alley and up a flight of stairs through the gates of hell, obviously, in to the bowels of a dark and satanic interior. Beelzebub himself holds court from one corner whilst various demonic faces, props and devilish ephemera encircle the space.

In the centre is a makeshift stage with a light studded backdrop surrounded by a sea of Wednesday fans; all long hair, leather jackets, tats and boots. Wednesday 13 aka Joseph Poole, a name he hates with a passion, ‘It makes me sound like a serial killer man’, is holding court in the centre with fellow Wednesday 13 guitarist Roman Surnam.

The last time I saw these two was just under a year ago when the band played their a full on theatrical set at the city’s Club Academy. It was pure Alice Cooper meets Kiss style showmanship with multiple costume changes to a heavy rock death/metal soundtrack. I interviewed the lead singer that night and he turned out to be one of the nicest guys you could meet. Eager to talk, he filled me in on his fascination for conspiracy theories, time travel and his ‘mom’ who detested him swearing, he claimed never to have cussed in front of her! A story he repeats for the crowd tonight who are simply awestruck to be in the presence of their gushing hero. He’s eager to talk, play guitar, tell stories and answer any question they can throw at him.

Wednesday fills us in on what his movie, if he ever made one, would be called. ‘Wednesday 13’s very bad movie’, that way if it sucks, it’s like hey, that’s the fucking title of it’. He told the story of meeting James Brown after a Murder Dolls gig which he had just finished:

“I was eating these hot chicken wings and my hands were all covered in hot sauce and James Brown starts walking this way and I’m ‘oh shit it’s James Brown’ and everyone is going ‘James Brown, James Brown’, and he’s going ‘yeh, urgh urgh’ and he stops right at our table and throws his hand right at me and goes ‘ugghhh’. I got chicken wing sauce all over my hands, and I’m not gonna leave James Brown hangin’, even with that shit all over my hands, and he shakes my hand with his, then he slicks his hair back with it. And he didn’t even realise it and I get to see the hot wing sauce slick through his hair and it was like, ‘that just happened?’, that’s a true story, I couldn’t make that up”. 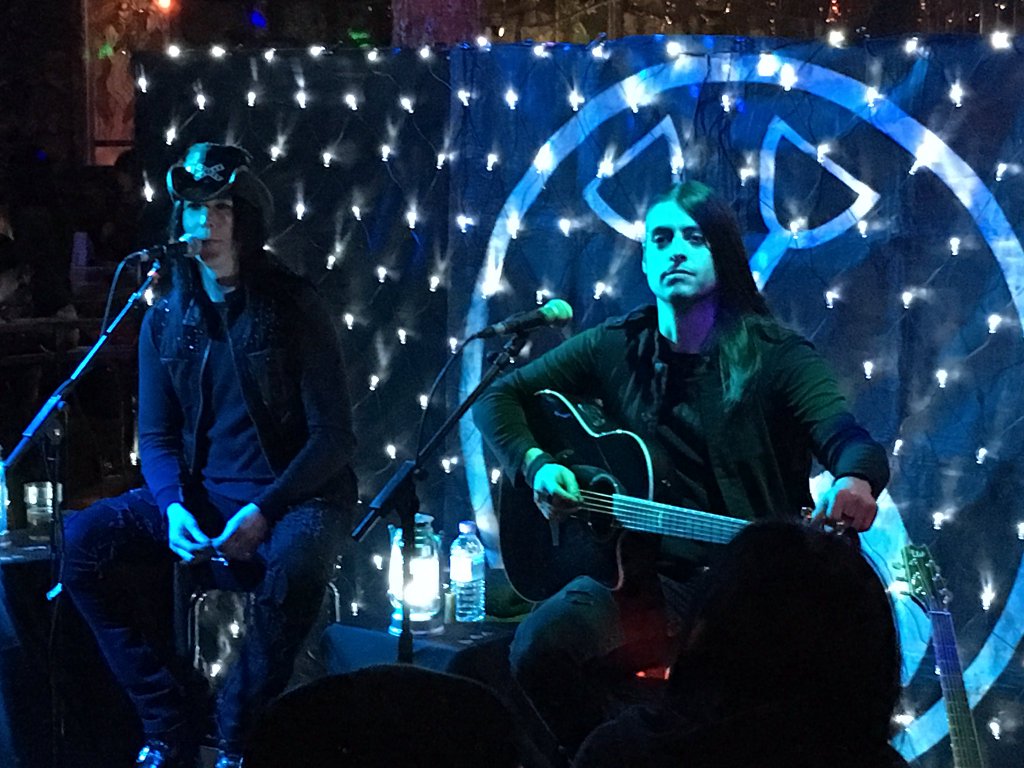 The duo play a huge variety of Wednesday 13 songs from all parts of his long career going right back to the days of Frankenstein Drag Queens through Gunfire 76 up to the present day. Including Fuck You, Scary Song and I Want Bad Things To Happen To You, without the menace and swagger of a full band performance. No screaming, no props and no make-up, just Wednesday being the most charming host you could ever meet.

One guy in the audience offers them a drink; ‘get me a slug of Jack’ says our host and the guy obediently goes to the bar and hands the two shots over. One audience member shows off his full arm Wednesday 13 tattoo to the much impressed front man and one of the female audience members offers to marry him!

The whole night is light hearted and fun and even the utterly gross story from the Gunfire 76 touring days when Roman drank from a tampon infused Gatorade bottle on the tour bus doesn’t sound half as revolting as it should do! Maybe it’s was the whoops from the adoring crowd, Wednesday’s infectious smile or his confidently spoken delivery, whatever it’s just good wholesome fun. Something for the hard core fans of course but I can’t help but laugh along with this engaging character.

This was the last night of the UK Unplugged tour and the band are off to Australia in April on a world tour which end in Dallas on May 19th. They return to the UK for a short residency at The Garage, London for their annual Halloween celebrations!

All words and photo by Nigel Carr, please do not reproduce without express permission. More writing by Nigel on Louder Than War can be found at his Author’s archive. You can find Nigel on Twitter and Facebook