Home Blogs We Lost The Punk Rock Wars, We Are Generation Clarkson 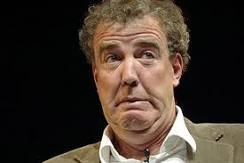 It’s that sinking feeling when you suddenly realise that your generation was not the raging bull revolutionary rush of punk rock, the year zero commandoes who changed the world with the best soundtrack ever, the spiky topped last uprising in pop culture, the cut and paste xeroxed post punk revolutionaries who wrote a new rule book.

Nope, it was none of those things.

It’s that dawning, crunching realisation that it was not the sex people or the idealistic last stand of the counter culture but, in reality, the tweed breathed, silent majority who now avidly watch boring programmes about cars…that’s right we were never generation punk but Generation Clarkson.
As I watched the jowel faced one turn up on TV at some arcane, dreaming of blood stained, fox hunt in Oxfordshire at the weekend, along with that other tweedy, ash breathed, plastecene skinned representative of my generation Nigel Farrage I sunk into despair.

It was at this moment that I realised that despite all our endeavours, idealism and hope that my generation was even more tweedy, cynical, selfish and downright hideous than any other generation that it thought it was rebelling against.

Farrage and Clarkson- they not only talk like some of the people I knew at school they also dress like they must do now- blokes dressed by their wives and cut price anti fashion chain stores that sneer at the male figure. I suddenly and momentarily felt old and alone and thought of all those pullovers tucked into piss stained, bad fitting trousers and equally piss stained, ill fitting views that were nicotine stained with cheap cynicism and the politics of greed and selfishness and wondered where all that idealism of youth had gone from my generation and realised that we had somehow ended up with Generation Clarkson that was even more filthy and greedy than ever before and that it was all the fault of pop culture.

Of course the memory plays mean tricks and documentaries bend the truth all out of shape. Those documentaries make my generation seem like a punk rock hoe down with lots of mohicans and Sex Pistols making lots of noise and endless hours about John Peel and Joy Division but if there was lots of great noise going on there was only about 25 of us listening to it. Everyone else was too busy becoming an even worse version of their parents and for every copy of Sniffing Glue that found its way round the country there was a million copies of the Daily Torygraph and for every raging debate on racism and sexism there was little England was still reigning triumphant with its curtain twitching politic view of the world and for every roots radical there was the silent majority of Generation Clarkson with their petrol head banter and tweed brained views on life.

The future is tweed…