Home Books UK Book Reviews We Could Be….Bowie And His Heroes by Tom Hagler – book review 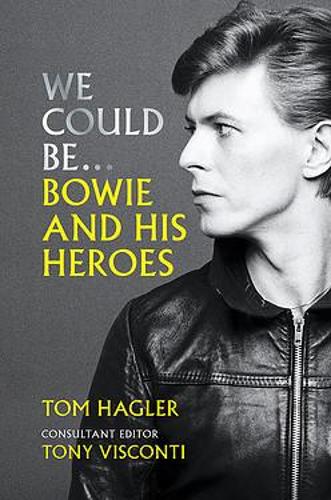 We Could Be…Bowie And His Heroes by Tom Hagler

Tom Hagler delivers a fresh take on writing about David Bowie and the encounters people had with him throughout his life. Bowie’s long-standing producer and lifelong friend Tony Visconti was on hand as consultant editor to amend and add the truth to some of these stories.

Have you ever wondered what it might be like to meet David Bowie? What you might say? How would you behave? I have dreamt about it, thought about it and almost experienced it when my friend met him in the ’80s after his gig in Manchester at the after-show party. I revelled in her story afterwards, the closest I would ever get. I’ve never forgiven her for being there without me in tow and him kissing her hand like a true gent. So how did the people in this book who met Bowie react?

And before you say not another Bowie book, this is no regular biography. It is simply a book that can be picked up at any stage throughout its pages and read at leisure. It contains 300 very short vignettes from a wide range of people, musicians, actors, filmmakers, politicians, artists etc. If you are like me though, a huge Bowie fan, you’ll want to demolish it in a few sittings. It really is refreshing; honest, warts-and-all accounts, a bit gossipy, from the people who encountered Bowie from his early days as Davy Jones (Chapter: Absolute Beginner 1947-69) through to the height of his explosion and drug-taking years (Fear and Foaming in Los Angeles 1974-76), right through to his more reclusive years (The Next Day 2005-16). It’s true that not everyone’s experience was a positive one, but many felt they had met their God; like Will Sergeant, who was rendered so speechless he spilled his drink over Bowie, but later he got him to sign all his 35 albums and 15 singles, like a true fanboy.

Many encounters led to sexual liaisons, of which there have been many – he is known to have bedded many of his leading ladies of the films he acted in. Annie Lennox left us pondering if her duet with Bowie at Live Aid developed into anything more romantic. He was more forthright with Debbie Harry, about what he’d like to get up to with her when they were in close proximity. However, the book avoids any tales of groupies, or salacious gossip of underage girls, which attempted to blight his star-status after death.

A couple of people refused to take his calls, as they didn’t actually believe it to be him and someone playing a prank. Not all encounters are favourable, and you’d definitely have got on the wrong side of Bowie if you had emailed him and others without doing blind copy, it is guaranteed you’d have got deleted. Either way, if you met Bowie, it’s an experience you would never forget. In the main, it was his charismatic personality, intelligence and his sense of humour that comes shining through.

I dived headlong into the book after Tom sent it to me just before Christmas, a truly unexpected present. Once I’d started I just couldn’t put it down. It is riveting to read about all the people who had met Bowie – but there are lots more stories not included in the book. I recall a story Steve New (Rich Kids) relayed to me, he was playing guitar on Iggy Pop’s Soldier LP at Rockfield Studios, Bowie was producing. A fight ensued after Bowie was trying to hit on New’s girlfriend at the time – Patti Palladin (Snatch / Flying Lizards). It’s not the only fight Bowie was to be involved in through his life, Axl-Rose also took umbrage at him flirting with his girlfriend.

I definitely learnt something new in reading this book, for instance, we hear about Bowie as an art critic, on the editorial board at Modern Painters magazine, where he interviewed renown artists such as Tracey Emin, Damien Hirst and legendary reclusive artist Balthus.

If you’re looking for something Bowie-related which is different, painstakingly researched and six years in the making, with short and to the point tales, then this book is the one for you.

We Could Be…Bowie And His Heroes is available at all good bookshops. You can find it at amazon here