Home Blogs We Are The Best! Broadway, Nottingham – film review 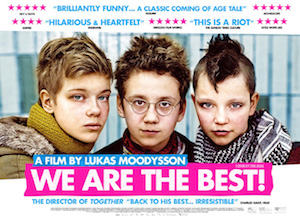 It seems to be a new rule of film that each year must bring us a joyously optimistic, heart-warmingly feel-good punk film. Last year gave us the Terri Hooley biopic Good Vibrations; this year gives us the fictional story “We Are The Best!”

Granted, it’s only April, but I was beginning to wonder if my end-of-year film list would be anything other than surprisingly American-orientated, helped by the fact that Jim Jarmusch and Wes Anderson have both bought out typically excellent new films. I knew it was surely only a matter of time before Europe started to produce the goods this year; what I wasn’t expecting so much was that a feelgood coming-of-age Swedish film would capture the spirit of punk so acutely.

Recent years have seen the director of this film, Luckas Moodyson, become associated with demanding avant-garde features; but this is him returning to a sense of entertainment. The storyline is straightforward enough – two misfit thirteen year old girls (Mira Barkhammer and Mira Grosin) form a completely inept punk band, recruiting another misfit, a wholesome Christian and accomplished guitarist who they set to “convert” to the punk world (played by Liv Lemoyne with impressive commitment, getting her long hair drastically cut on-screen.) The scenes of boisterous band practices look as though they were as much fun to make as they are to watch, and brim with authenticity.

Considering Moodyson’s reputation for the avant-garde, the direction of the film is strikingly simple. Yes, there are some evocative shots of snow-covered Swedish suburbs, but generally the camera work and editing are completely straightforward. As a consequence, the film is carried by the natural performances of the young cast and countless bright, funny one-liners. Boldly setting the film not in punk’s heyday but in the eighties adds a new dimension as the girls constantly have to deal with being told that punk is dead, merely adding to their consummate “misfit” status. It’s also something of an education for viewers (myself included) who didn’t realise quite how fully in line with the UK Sweden clearly was in terms of popular culture and musical timelines.

There are so many films (largely American) made that claim to be for those who don’t fully fit in, and yet I often find there is something very unconvincing about them. In “We Are The Best!” we finally have a film that feels it really is, without ever being patronising or contrived. Don’t go expecting the usual fare from Moodysson, but do go expecting to see a properly punk film which will also see you leave the cinema full of optimism.

We Are The Best! runs at the Broadway until 02 May and is out on general release at other cinemas across the UK now.

All words by Amy Britton. More writing by Amy on Louder Than War can be found at her author’s archive.