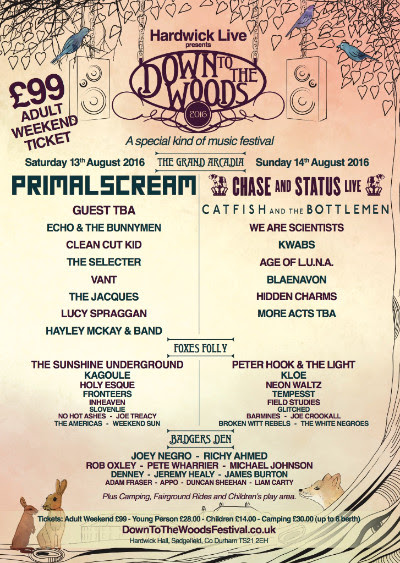 We Are Scientists have been announced as the latest addition to the inaugural Down to the Woods festival in County Durham.

They join Saturday headliners Primal Scream and drum and bass giants Chase & Status who top the Sunday bill at the 10,000 capacity festival held in the grounds of Hardwick Hall, Sedgefield from August 13th – 14th.

Joining Primal Scream on the festival’s main stage ‘The Grand Arcadia’ on Saturday are Echo & The Bunnymen, Clean Cut Kid, The Selecter, Vant, The Jacques, Lucy Spraggan, Hayley McKay and a very Special Guest still to be announced.

On Sunday Catfish and the Bottlemen and We Are Scientists join headliners Chase And Status, alongside Kwabs, Age Of L.U.N.A, Bleanavon, and Hidden Charms.

The ‘Foxes Folly’ stage, located near the Roman-esque secret garden is headlined on Saturday by The Sunshine Underground and on Sunday by Peter Hook & The Light. That stage also plays host to 20 acts over the weekend showcasing upcoming talent including Kagoule, Kloe, Holy Esque, Neon Waltz and Tempesst.

The promoters are also promising a tempting array of culinary delights from around the world, a family-friendly fun fair, a kids playground and face-painting. If you need a break from the kids then the adults can check out the fabulous Gin Palace, Champagne Bar and the quintessentially British Pimms Garden alongside various craft beer stalls.

Down To The Woods are priced at £99 per adult, £28 for young people aged 13 – 16 and £15 for children aged 3 – 12. Day tickets are available and there are also boutique camping and special ‘Gold Ticket’ VIP options. Tickets can be purchased here.