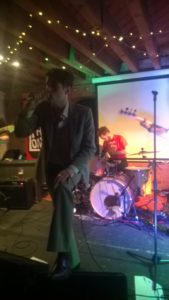 On paper, it would be impossible for Nottingham’s annual Waterfront Festival to be anything other than brilliant. The thirty-three bands that make up the line-up are so incredibly diverse that it nobody could possibly leave unsatisfied, and the very reasonable ticket price (with all profits going to charities) simply serves to encourage attendees to take gambles and drift about making open-eared discoveries. Even better that it all takes place in the cities beautiful Canalhouse – watching a feast of live music surrounded by beautiful original architecture over the canals, particularly on what thankfully turns out to be a sublime summers day really does shape up to be as perfect a way to spend a weekend as it sounds. Narrowing this down was never going to be easy, but here my pick of live recommendations selected from the day:

YOU WANT FOX – Staples of the local scene, grunge punk duo You Want Fox always warrant enthusiasm. Bassist and vocalist Natalie Caulton and drummer Colette Elton bring some filth and fury to 4:30pm on a Saturday afternoon in the best possible fashion. Apparently “the sweariest band in Nottingham,” their two-fingered salute of a sound also mixes with melody – they write raw and visceral songs, but with harmonies that stay in your head, and transfer this to the stage impeccably, with added charisma and a chemistry between the two of them that truly sparkles.

BABE PUNCH – Babe Punch’s local reputation as a mouthpiece of feistiness and always reassuringly brilliant live act is firmly sealed. Oozing stage presence, the thing that is most distinct about them is a kind of swagger, but in a way that goes against the machismo traditions of the word. This is a distinctly feminine kind of swagger.  The quartet command the stage with energy and well-written songs, vocalist Molly Godber’s voice running through the room hypnotically against the driven sound of the band. Closer “Shrinking Violet,” a more recent track from a band who have built their reputation over the last few years, simply shows a band ever evolving into their own sound.

FONDA 500 – After some milling around that leaves us settling on the blues musician Jinda Biant (a kind of hybrid of Devendra Banhart and Jon Lee Hooker), we pile back inside for cult heroes Fonda 500. Long-term mainstays of the underground scene in their native Hull, it’s not hard to see how they’ve gained such a legion of followers. Newcomers to the band all appear completely converted tonight as they shake the crowd a quirky cocktail combining the accomplished with the almost raw-art and the melodic with the innovative. Almost too full-on to fit the usual lo-fi template, Fonda 500 are a genre all of their own.

ARCH FEMMESIS – Gracing the outdoor stage at 8:30 are Arch Femmesis, an electro duo made up by synthesist Meddla and hypnotic vocalist Zera Tonin. Tonin is a born star; holding the crowd captive with a set that shifts into full performance-art mode. The acidic sharpness of their lyrical bite, infused with a gender agenda, is layered over a minimal synth sound in a contrast that works incredibly well. Everybody who had already seen them knew I would love them, which just goes to show how well people must know me as their avant-garde stylings make them a major recommendation from me. 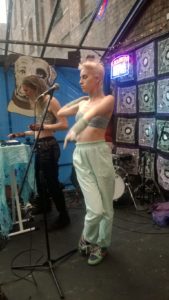 WITCH OF THE EAST – As last years debate about male-dominated festival bills has continued into this year, the Waterfront has done a truly amazing job of ensuring a bill crammed with feminine ecriture. The feminist bite of You Want Fox, Babe Punch and Arch Femmisis is continued with the boundary-shredding magick of Witch Of The East. Former Chambers vocalist Aeris Houlihan is no fan of artistic barriers and it certainly shows with this current project of hers, as she channels darkness and primitive desires in an almost lycanthrope fashion. Musically and vocally she puts me in mind of a female Mark Lanegan; delightfully raw to the point of guttural.

BUNKERPOP – By ten pm, its still a beautiful night here in Nottingham. The atmosphere around the outdoor stage has been one of peak summertime bliss, helped along by the fittingly smooth soul sounds of Chai 6ix, but getting back indoors to catch the essential live experience of Bunkerpop is an absolute must. The second Hull act to have made their way down for today, trying to convey their their live act is like a bit like plaiting fog, but try and imagine if Bertolt Brecht came back from the dead, involved as much as he alienated, and made a kind of quirky Anglicised-version of Krautrock. Unique and brilliant.

DO NOTHING – The unstoppable rise of headline act Do Nothing has been undeniably impressive, but its certainly not by coincidence. The Nottingham four-piece have shown themselves to have an incredible knack of songwriting craft; recent release “Gangs,” bringing them to deservedly wider attention. Having recently supported Interpol in Russia, they have developed even more as an accomplished live act since I last reviewed them eight months ago. Chris Bailey’s “natural born frontman” element that was always prevalent has been further galvanised, and they certainly grip their audience with a set of angular, arty post-punk overlaid by articulate lyricism. Its quite apparent that Do Nothing are set to hit truly stratospheric heights very soon, so I cannot recommend catching them live at this stage enough. The perfect closers to a fantastic day and night.

Special thanks to Will Robinson, Hannah Larham and all at I’m Not From London

Thanks also to Gigantic Tickets and Leftlion