Home Blogs Watch Out Or You’ll Become A Sinatra 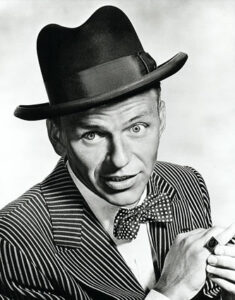 A viewing of a Frank Sinatra documentary and a listen to the new PiL songs made our man Simon Tucker think….

They all become Sinatra. Many of those artists that manage to break through the ceiling and become truly global in sales and influence end up Sinatra.

They come flying out of the blocks all spit and anger, wanting to change the world and smash the bloated royalty from the top of the mountain. It may take some time but a select few do it. They actually manage to create an internal and external change not only on their immediate surroundings but those all across this blue floating marble we inhabit.

It happens like this; young musician looks around at their lives and those of their friends and sees something needs changing. They look to music to find someone that is speaking their language. They inevitably find no one. They decide to do it for themselves. Onward they march, gathering steam, frightening those whose careers are about to be torpedoed. These lot try to absorb them in and neuter them to no avail, now just making them look even more like the dinosaurs that they have become. Up and up and up they go stirring hearts and minds racing to the stratosphere. They get there, they’ve done it, now what? They enjoy their moment in the sun thinking they will never be toppled. They become safe, comfy, complacent. Then they feel the sand shift below their feet. A ripple in the water. A nip at their ankles. A dip in sales and influence. Looking down they see someone new, exciting, untouchable. The music these upstarts make is alien, peculiar, indigestible. They try to absorb them, to pacify them, to ride on their coattails. And on and on the cycle goes.

Why call them Sinatra? Well look at his rise, fall, rise and fall. He WAS that young hungry artist, he DID reach the top (even reaching higher than most with his placement at the center of a presidential election and mob connections) He then saw Elvis, got scared, tried to absorb him, failed. Fell from his peak, had a reemergence, then bowed out just before the big-bang of New Wave/Punk.  Then replace Sinatra with the man who usurped him, Elvis. Same story (change young Elvis for young Beatles) same outcome. Then do the same with the Beatles and on the cycle goes with everyone from Johnny Rotten ( “look at me I’ve been listening to Sleaford Mods” ) to Oasis (from rock ‘n’ roll stars to rock ‘n’ roll bores) all falling into the same trap. It even looked like Dylan was going that way for a while but he’s managed that rare feat of pulling a late-period purple patch together and still excites with each release.

Not all musicians fall into this trap (although there’s not much opportunity for bands to become as globally influential as those heady days between the 40s and the 70s) and many influential artists still excite and refuse to sit still (look at David Byrne, Radiohead, Bjork etc) but the lesson is still there for anyone wanting to reach for the toppermost of the poppermost.