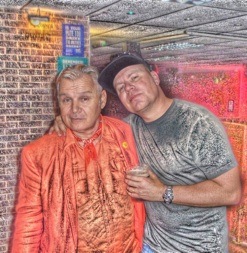 The measure of success in the Art-Punk music scene is not in dollars & cents, but in longevity. And in that regard tunnelmental experimental assembly has, without a doubt, been extremely successful. Since its inception in the UK’s mid eighties Post Punk and Rave scene, tunnelmental has fought a struggle against corporate consumerism and forged its own brand of anti-establishment bravado. While there have been stops and starts along the way, founding member Nigel R Mitchell has continued the boundary pushing ethos that served as the impetus for its initial formation and has continued writing and recording under variations of the tunnelmental moniker and line-up.
In the summer of 2010 Nigel decided it was time for a reboot. He had a new vision for tunnelmental that would focus on songwriting and high quality production. To that end he enlisted friend and former band mate Derek Pippert, whose beat making and production skills had become fully refined through years of working on music editing and audio for films. Born from this collaboration was a new style of music blending the spirit of punk activism with the sounds and pulse of electronic dance – “Punktronica”