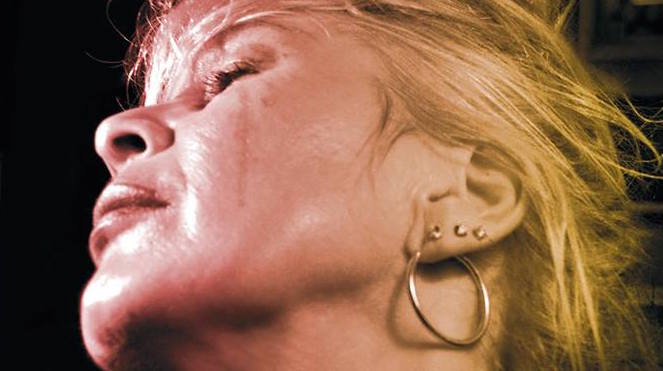 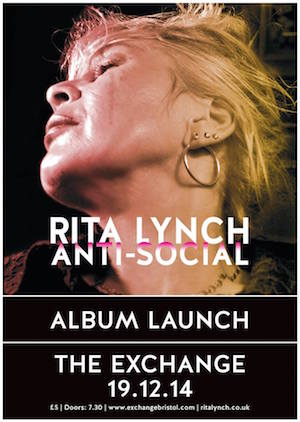 Scroll down to see the premiere of the brilliant new video by one of the stars of the Bristol underground / independent scene, the one and only Rita Lynch. Also below are details of Rita’s album launch show at The Exchange on the 19th Dec.

Much loved Bristol rock singer and all round force of nature Rita Lynch has a new album due out on the 19th December, a cracking selection of songs demonstrating perfectly why she’s considered something of a “fuckin’ legend” back in her home city and why she regularly gets compared to PJ Harvey. The second single off said album is the track Heart of God and it gives us great pleasure to be able to premiere the video for it today.

Rita Lynch has garnered an impressive standing in the Bristol music scene over the course of her career. Most notably she was a member of the Blue Aeroplanes, but she’s also had her music in films and TV shows, shared band members with Massive Attack, and was the main feature of a channel 4 documentary in the nineties.

It’s been said of Rita that she “Makes Motorhead sound like the Spicegirls” and that her music’s likely to appeal not only to fans of the afore-mentioned PJ Harvey, but also The Fall and Anna Calvi. We supplement that description by saying that her music has a wild ferocity and a frankness to it, and that she sings with a mighty impressive, feral yelp that she couples with assured, splintering and brilliant guitar playing. Judging by the album, which we’ve been lucky enough to check out in full, this is the sound of a woman at the peak of her creative powers, we think, and we can’t wait for the rest of the music press to hear this and ponder on the foolishness of the race to be the first to get their “albums of the year” lists out onto the streets which ultimately means so many albums (like Rita’s) miss out.

Live, Rita is usually joined by John Langley who Louder Than War readers will probably know from The Mekons but Bristolians will most like recognise as another member of The Blue Aeroplanes and another Blue Aeroplaner Mike Youe. They can also be seen on the video below which was recorded live and is soaked in sumptuous black and white photography giving the whole a distinctive film noir vibe.

The launch party for the album will be on the 19th of December at Bristol’s Exchange and more details about the show can be found online here: bit.ly/Rita_Lynch_Launch.

Rita can be found online here: ritalynch.co.uk and she’s on Facebook too. The album will be released through Bandcamp when it finally drops and we recommend keeping an eye on the links above so you can pounce on that link when it finally gets made public.

Oh, and watch out for an interview with Rita which should be running on this site very soon.