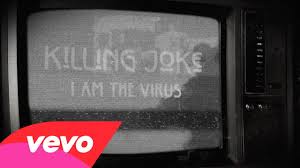 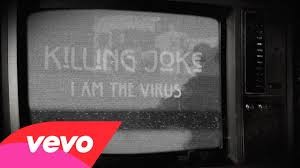 Killing Joke have been busy in the past few years – releasing a run of hard hitting albums that they have somehow topped with their hard hitting new single, I Am The Virus, which pulls no punches politically as is deals with the post 9/11 world and calls Tony Blair a liar amongst other stinging barbs.

Musically it’s an avalanche of power and fury with added Killing Joke dynamics and,for our money, the best thing that they have done for years.

A stunning piece of work that augers well for their upcoming album, The Pylon.

“Against the backdrop of the middle east and a new cold war, Killing Joke has produced its finest work to date”
– The Black Jester

Killing Joke are on a mission to take their music of resistance to a whole new level with latest / 16th studio album Pylon, released October 23rd via Spinefarm Records.

With the original line-up of Jaz Coleman, Geordie, Youth & Big Paul continuing to hold firm, the band will be headlining shows around the world, starting with a UK run in October.

Pylon was produced in the UK and Prague by the band and Tom Dalgety, whose credits include the hugely successful Royal Blood album, and isn’t designed to accompany a quiet night at home in front of the fire; Pylon is very much music as ritual – raw, uncompromising and precisely-targeted lyrically, with the artwork put together by regular band associate Mike Coles, the designer behind the very first Killing Joke album.

As for the album’s title, says Youth, “It’s simple… Stark brutal industrial suicide… This is the third in a triptych of albums, Absolute Dissent, MMXII and now Pylon… heavy and uncompromising, bleak dystopian lyrics, as well as some visionary celebration… lots of black pain emotion. To be honest, we remain genre blind so our music will always cover a vast spectrum of influences, from disco right through to heavy metal and beyond…”

While other bands of a certain vintage may struggle to hold their edge, Killing Joke are delivering the best and most relevant material of their career, with no mellowing or softening of the edges getting in the way – a line in the sand against mainstream music and corporate existence, with ‘I Am The Virus’ (“an intense, angry, uncompromising shout into the abyss”, according to Youth, and lead track from Pylon) providing a typically bitter taste of the ‘delights’ to come…

“I believe we delivered 15 tracks for the new album,” ponders Youth, who actually raised that number to 16 with a last minute dub remix, “and it could have been a lot more…”

“This record really showcases the power of Killing Joke,” continues Jaz. “I remember we once jammed with German outfit Can, and I don’t remember hearing Can…”

Difficult, perverse and wilfully unpredictable, Killing Joke continue to be a group that actually stands for something; Youth will tell you it’s “honesty, commitment and illumination”, and the others will doubtless have ideas of their own, but one thing’s for certain: what once seemed paranoid now seems downright prophetic, and for all of their adherence to darker hues, the future for Killing Joke seems bright… whether they like it or not.

To Pre-order the album, limited editions and exclusive merchandise head to: https://killingjoke.pmstores.co. All audio purchases of ‘Pylon’ from Pledge will receive the lead track ‘I Am The Virus’ as an instant download.

The new album will be released in variety of formats, including Deluxe Double CD & a strictly limited Double Coloured Vinyl, with both versions featuring additional tracks.

Killing Joke will be playing a 10 date headline UK tour to coincide with Pylon’s release, starting in Cardiff on October 25th and finishing at the Roundhouse in London on November 6th. This will be the start of an extensive period of touring that will see this most legendary and infamous band taking their own particular message to audiences around the world.