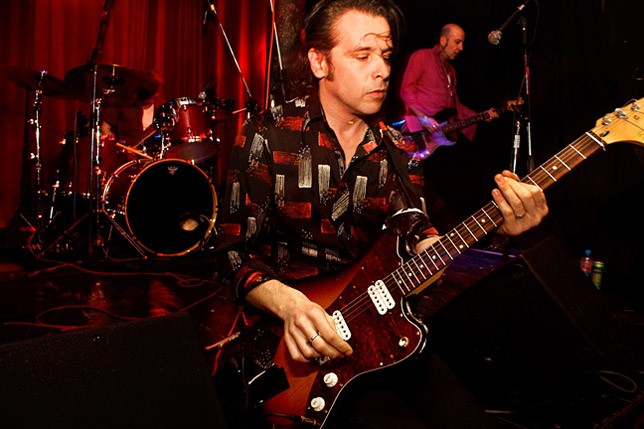 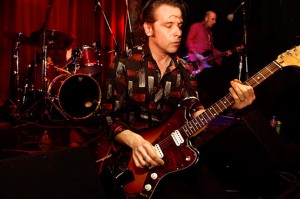 Throughout 1992 Nick Emery travelled with Gallon Drunk with his 16mm camera, shooting them live, backstage, and in the studio.

The film has footage from Cologne, The Astoria, The Scala Cinema in London, and in Wapping, London at Elephant studios.

In 1992 Gallon Drunk was a contradictory mix of nervy, energetic assault and laid back nonchalance, a stance and attitude that the film FRUG & SHIMMY endeavours to capture with its raw, visceral approach. This was on the cusp of that transitional period when a primordial rock and roll band playing and recording for the hell of it, transformed into the tight, polished unit that achieved a step change with the album ‘From the Heart of Town’. The early Gallon Drunk sound was characterised by primeval driving rhythms and instrumental incision punctuated by shrill, piercing vocals. The template was complemented by shuffling maracas, a loping or rolling bass, syncopated drumming and the savage, primordial feedback of the combined brainbiter guitar/wailing keyboard assault. Combined, all this potential mayhem resulted in an aural frenzy of nerve jangling proportions when committed to disc or let loose in the smoky, squalid venues of early 90’s England.

The film that eventually became FRUG & SHIMMY was conceived on the principal of trying to get a quart out of a pint pot. Originally a video shoot for the ‘Bedlam’ release, studious attention to budgetary detail and generous discounts and deals with labs and facilities houses, paved the way for a short film, proposed as a visual document of the band at that juncture in time. Despite the ‘Bedlam’ video taking priority, the band refrained from playing the song live and the video shoot for the single was mysteriously cancelled. By the time the film unit reached the recording studio for a last ditch attempt to salvage something usable, not a single frame for ‘Bedlam’ had been shot and the budget was effectively blown. Over the previous months some live footage had been shot at a number of gigs, material that was exciting enough to justify pursuing the project and eventually realising something that resembled, if not much else, the spirit of the original idea.

Despite contrivances and artistic pretensions, FRUG & SHIMMY pertains to being an objective document (as opposed to a documentary), of a band at a particular moment in time. To be clear, this amalgam of mixing and matching footage takes liberties with the reality in so far as it recreates some performances that never actually happened, but the attitude was that some conventions such as continuity and synchronisation can be sacrificed so long as the final result grooves. Whether it’s an accurate or objective version of events is therefore a matter of opinion. The film is also an exercise in self-indulgence, at one with the attitude of Gallon Drunk up until that time, as clarified by James Johnston in an interview in 1992: “We were a bit haphazard when we started, and it was certainly nice to start without a care for anything, almost even the songs. It was purely for the exhilaration of playing it live, and it was ridiculously self-indulgent. But you can’t do that forever.”

The film dispenses for the most part with the obligatory back stage footage, de rigueur in most music productions, and cuts straight to the live performances often filmed in venues with limited stage lighting. The sound quality reflects the absence of professional recording equipment for the most part; one recording was completely ruined when the machine chewed the tape, another got lost and in a final ignominy, the tape operator forgot to press ‘record’. In this type of film making rarely do things turn out as planned as it’s not always possible to anticipate how an event will unfold. What there is at the end of the day is ordained by the situation and circumstances; when viewed, the material shot can often be anticlimactic or should really be better. By the same token it’s entirely possible to end up with absolutely nothing at all, which fortunately wasn’t the case with this particular film.

Despite these inherent problems, there are serendipitous moments that can never be preordained no matter how much time, money or ability is applied. At the beginning of Draggin’ Along, a member of the road crew rushes onto the stage to adjust a microphone stand. James Johnston gestures to him to forget it, but he continues none the less. This was originally seen as an irritating intrusion into the band’s performance, that this guy had bungled into the film thereby degrading it by detracting from the purity of the performance. This initial reaction was wrong and complete bollocks as the necessary intervention was not only part of his job description but an integral part of the rock and roll experience and an illustration of the unpredictability and authenticity a of a live performance. Another unanticipated incident occurs some minutes later when the same microphone stand is given a nifty kick by James and rolls unhindered towards the edge of the stage, hesitates for a split second before careering over the edge and hitting the ground a few metres below with an audible ‘clang’.

Conversely, A number of Gallon Drunk gigs were afflicted by misfortune: an Astoria gig came to a grinding halt after twenty minutes due to either a power failure or equipment breakdown, and a gig at the Town & Country Club, Kentish Town supporting Screaming Jay Hawkins had one of those ultimate rock and roll moments when it didn’t happen at all due to the legend deciding not to show up. With typical bad scheduling this particular Gallon Drunk gig was to have been filmed on several cameras as the basis for the film that eventually became FRUG & SHIMMY, symptomatic of the direction in which events were moving and one in a number of false starts, cancellations and misunderstandings that hampered the project throughout a six month period in 1992.

One event that has gone down in the annals of notoriety was the first Madstock held at Finsbury Park over the weekend of the 8th/9th August. On the Saturday, there was a palpable sense of menace and tension in the air from the off, an atmosphere that could be cut with a knife. Variously this had been attributed to NF/BNP elements agitating in the crowd, over zealous security personnel or plain collective drunken aggression by a section of the audience. As is evident in the film, bottles, glasses, coins and every form of available detritus that could be thrown was aimed at the stage during Gallon Drunk’s opening performance, and even during Morrissey’s, possibly the reason he pulled out of the Sunday gig. The onslaught of missiles reaches its apogee during ‘Two Wings Mambo’ when a deluge of missiles can be seen raining down on the stage, with the band looking pensive and James exclaiming “I’m over here, mate!” after a bottle whistles precariously close to his head. On Sunday the atmosphere in the crowd was less antagonistic, although an enhanced security presence alerted any potential miscreants as to the reaction that could be expected should disobedience ensue. Despite having permission to film on both days, the film makers were harassed, intimidated and threatened with physical violence by security the moment a camera appeared, impromptu negotiations eventually allowing only one camera to be used on the stage. When this issue was discussed with the organisers later on Sunday and the threat of violence raised, they laughed and laughed and laughed at the  entertaining jest.

A couple of weeks later the band played a stonking set opening the Monsters of Spex/Rhinerock festival in Cologne/Koln on a bright summers afternoon in front of a more respectful audience. It is this gig that constitutes the main portion of the film. The initially nonchalant crowd, at first cooled, then smouldering, eventually surges towards the stage as the groove got going, setting the scene for a rapturously received performance. Prior to Gallon Drunk’s aforementioned self-indulgence morphing onto a higher musical plane, there is the cathartic moment where the link with the past is broken, an instant of self-harm, or even self-mutilation, as evidenced during the climatic penultimate number.

It is this spontaneous and unintentional incident that gives the film its motif.  The Yamaha SK10 keyboard with its broken key was an accident waiting to happen – and it did. You gotta spill blood for your game and during a literally ripping ‘Two Wings Mambo’, either through passion, frustration or rage, the sharp edge lacerated James’ finger during a frenzied assault on the knackered instrument that was about to be consigned to the skip. There was blood on the keys, the guitar, his clothes and the stage, but being a trooper, he saw it through to the end, eventually being temporarily patched up by honorary nurse Kat Bjelland before being taken to hospital for professional treatment.

As the Hues Corporation put it in ‘All Going Down Together’: “Talk about the Kings and their Ruby Rings….”

Nowhere does it say that success comes easy, drawing blood for the cause is indicative of that; part of the initiation ceremony to attain a higher level consciousness and understanding, perhaps.