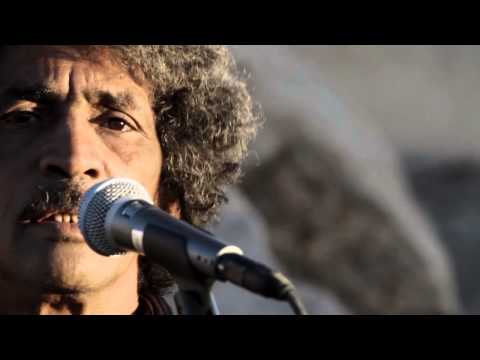 The full tracklisting is as follows:

Recorded in the Joshua Tree desert, California, due to political instability in their country, this is the first time, the band recorded away from their homeland.

“It still had to be recorded in a desert,” says bassist Eyadou Ag Leche. “We would like to live in peace in the North of Mali, but this is very difficult, there is no administration, no banks, no food, no gas. Joshua Tree is in the high desert of California, we love all the desert, these are places where we feel good to live and to create.”

Recorded over three weeks in a home studio, Emmaar has a distinctly organic feel. “We weren’t in a proper studio or outside in the desert like Tassili,” Ag Leche says. “We built a studio in a big house in Joshua Tree. Everybody in the same room, with no separation. We wanted something which sounded natural and live.”

Along with the original members who founded the group in the 1980s (vocalists and guitarists Ibrahim Ag Alhabib, Abdallah Ag Alhousseyni, and Alhassane Ag Touhami) and the younger generation who grew up listening to the band and joined in the 1990s (multi-instrumentalist Eyadou Ag Leche, guitarist Elaga Ag Hamid, and percussionist Said Ag Ayad), a group of American musicians appear on the album including Red Hot Chili Peppers guitarist Josh Klinghoffer, Matt Sweeney from Chavez, Nashville fiddler Fats Kaplin, and poet Saul Williams.

But while the location was new, their music still focused on life in the Sahara. “The new songs of this album talk about what we feel today,” Ag Leche says. “The Tuareg issues, the need of being recognized by the administration of our country. But also some poetic ways of describing our feelings. The Tamasheq language is using a lot of metaphors, and it comes from the old traditional tuareg poetry that tells about the Tuareg tribes, their adventures in the desert, the wars, but also the beauty of the desert, the sky, the lands, and the Assouf, our blues, and nostalgia of an old time.”

If Tinariwen pays homage to old times, it’s because their present is in flux. Turmoil has embroiled their region once again, as governments and powers rise and fall, almost with the regularity of the seasons. “It is going to be a very long way to peace in the north,” says Ag Leche. “It’s been up and down. The Islamist are all around in the North but also some thieves and bad people taking advantage of this chaos to frighten our people.”

Mali, it seems, is the forgotten, or ignored, brother of the Arab Spring, but on Emmaar Tinariwen tell about the trials of their people and tells the world of the plight of their families. “The ideals of the people have been sold cheap, my friends / A peace imposed by force is bound to fail / And gives way to hatred,” Ag Leche sings on “Toumast Tincha.”

“Our people are used to moving all the time,” Ag Leche says, “since the late 60’s we have always been moved between Mali, Algeria, Libya, Chad, Mauritania, Niger. Nowadays a lot of our families moved to the Algerian border or close to Niger because of the situation with the Malian administration. We are refugees in a lot of countries in Africa.”

Hugely celebrated and acclaimed, they released their debut album, The Radio Tisdas Sessions in 2001, and over the past decade they have continually toured the world, picking up some of the most respected music awards, including a BBC Award for World Music in 2005, the prestigious Praetorius Music Prize in Germany in 2008 , the Uncut Music Award in 2009 for Imidiwan: Companions and most recently a Grammy for their 2011 album Tassili.