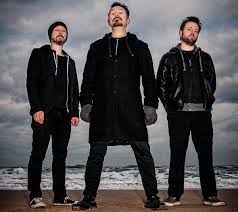 Therapy? have previewed the dark and mysterious new video for their song Tides from their new single.

The EP, which features two exclusive bonus tracks (Smile Or Die and Slippies) and a special remix of Insecurity, will be released on April 15 through The Amazing Record Co..

Frontman Andy Cairns told Team Rock : “There’s a Samuel Beckett influence on Tides. I used to live near the harbour in Dun Laoghaire, Ireland. I’d sometimes stay up all night to try to get inspiration for songs and often ended up going down to the pier and just look out at the waves. Later on, I found out that Beckett used to get a great deal of influence from that as well. I took that low point in my life and how I managed to dig myself out of it as an inspiration.

“The spark that lit the idea was a quote from his play Krapp’s Last Tape,” he adds. “It goes, ‘Spiritually a year of profound gloom and indulgence until that memorable night in March, at the end of the jetty, in the howling wind, never to be forgotten, when I suddenly saw the whole thing. The vision at last… the fire that set me alight.’ The idea was fortified after listening to Standing By The Sea by Hüsker Dü from their 1984 masterpiece, Zen Arcade.”

The band continue their Infernal Love + More tour with The Membranes Stoke Sugarmill on March 11 and Nottingham’s Rescue Rooms on March 12.