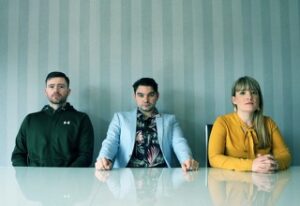 Hard-rocking rifftastic Liverpool trio, The Mono LPs, release a new video for the song Hell, Save My Soul (out this week on Fretsore Records).

The Mono LPs are indebted to the 70’s hard rock sound. Big guitars, rising riffs and crashing drums are the order of the day. Their twist though, their secret weapon comes in the form of Vicky Reid’s great cello work, which adds another dynamic to their sound, especially as the close off their new song, Hell, Save My Soul.

As the band say, “We wanted to tap into those huge bands from the 70s like Led Zeppelin, Deep Purple etc. Those with massive riffs you know instantly and sing along to. We wanted to see if we could blend the guitar and cello playing the same riff to make it as big as possible. The song is a bit of a love note to that rock era.” They hit all the right notes here to capture what they had in mind.

The Mono LPs have recently signed to Fretsore Records and will be releasing their new album, Shuffle/Play, early next year. For now, any fans of that big 70’s rock sound will have to make do with the new single in anticipation of their album release. Check out the video below.