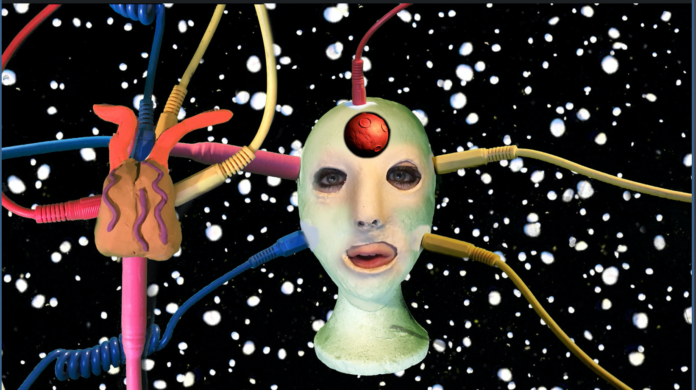 NUMBER ONE SELLING NEW ALBUM ‘I AM MORON’ OUT NOW!

Today sees the release of The Lovely Eggs brand new single ‘Long Stem Carnations’ via Egg Records. The track, taken from their number one selling album ‘I am Moron’, is released on limited-edition coloured 7” vinyl and backed by brand new B side ‘The Voyage’.

‘Long Stem Carnations’ was inspired by the Mars One programme, a global project which aims to establish a permanent human settlement on Mars.  Applicants are offered a one-way ticket- never to see earth again. This fascinated Lovely Eggs Holly and David who drew parallels between this mission and their own isolation as a band. ‘Long Stem Carnations’ is a funeral march for society’s outcasts and freaks. It’s an existential voyage in cosmic form. “Is there an internal self-destruct button that cannot be destroyed?” said Holly. “We are all the pilots of our own ship. You’ve just got to remember it’s important to try and hang on and see the mission through.”

For the video the ever-inventive duo used lockdown time wisely and creatively to handmake their own claymation video for ‘Long Stem Carnations’.

“We’ve been making the video for “Long Stem Carnations” ourselves at home over the last few months,” explains Holly. “It’s been a bit of a beast really. We love claymation and had done a bit of it in some of our previous videos, so we wanted to do something with animation. We forgot though that it just takes SO fucking long. And we had no idea it was going to turn out how it did. We started by doing some animation bits and then David got the idea to have our heads but animated versions. So, we made a plasticine mask to cover my face. We modelled it on the cut off head of a dummy and then transferred it to my face. It looked so freaky it was unreal and right there and then we knew the video was gunna take a drastic turn and we just followed it! We then decided that it would be a cool idea if I WAS the cut off dummy, cos the song is all about being cut off and isolation, so it was a perfect fit thematically. We then faced the task of actually figuring out how to film it and put it all together!! We are definitely not animators or video makers, so it was a big learning process that took two months to come to fruition. We also had our seven year old little boy at home with us throughout the whole process and if you can imagine making a claymation video out of plasticine with a 7 year old in the room, well I’m sure you can imagine!! But we’re glad it’s done and pleased how it turned out in its own freaky way. It’s for the big bunch of freaks out there who feel like they’re disconnected and out there on their own, but we’re all connected in some way. We’ve all just got to hang on for the ride!!! Long Stem Carnations forever!!”

‘I am Moron’ was declared “Album of the Day” by BBC 6 Music and received critical acclaim from the national press. The Sunday Times called it “A Triumph”, ★★★★ “I am Moron is much cleverer than it would have you believe”- The Telegraph, ★★★★ – I Paper, 9/10- Louder Than War, “An act of fine calibration of noise and sweetness”- Q, “Packed with their observations of modern culture and the utter madness of the current world”- Sunday Mirror, Album of the month- Classic Rock, “Their Best Record Yet”- Long Live Vinyl, 8/10- Uncut, “Anarcho spirit dominates”- MOJO, “Excellent”- Brooklyn Vegan.

Despite all of this deserved praise and success, the band have obviously been gutted to not be able to play live throughout this period, and due to the on-going Coronavirus situation, have made the tough decision to cancel all scheduled live appearances this year and have focused their attentions and hopes on a UK tour in February 2021.

The Lovely Eggs are one of the most exciting, innovative and genuine bands of the Great British Underground. Welcome to their world. Welcome To Eggland!

Catch the band live at the following dates in February 2021:

Order the new album ‘I Am Moron’ HERE:

Find The Lovely Eggs online at:

SAD MAN and Francis Lowe: Stories From An Island – album...