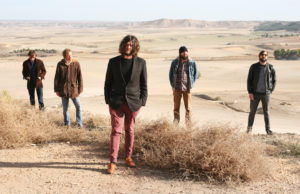 In anticipation of their debut album Over the Silvery Lake, The Hanging Stars today release the video for Crippled Shining Blues.

The Hanging Stars debut Over the Silvery Lake will be released via The Great Pop Supplement/Crimson Crow on March 11th 2016. The band is best described as a loose collective fronted by songwriter and guitarist Richard Olson (The See See, Eighteenth Day of May). Their dreamy psych-folk is beautifully blissed out, making you long for hot summer days instead of the cold, wet, misery we’re always faced with.

In 2015 they released two critically acclaimed singles through The Great Pop Supplement, with our own John Robb giving The House on The Hill 10/10 on Lamacq’s Roundtable. The album itself was recorded between LA, Nashville and Walthamstow, with each place distinctly influencing the record. With producers Rob Campanella (The Brian Jonestown Massacre and Beachwood Sparks) and Brian O’Shaughnessy (Comet Gain and Beth Orton) at the helm, they’ve produced a truly beautiful record.

You can hear the hazy grooves of The Hanging Stars in the incredible Crippled Shining Blues. This upbeat track is packed with a multitude of sounds that has you swooning over the bands chilled out sound. The perfect precursor to Over the Silvery Lake.

You can catch The Hanging Stars on tour across the UK and beyond, check out the dates below:

~
The Hanging Stars can be found online here thehangingstars.com. They’re also on Facebook and tweet as @TheHangingStars.