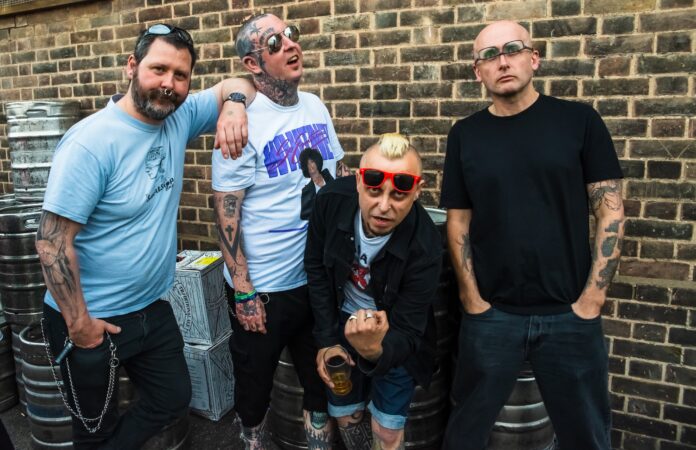 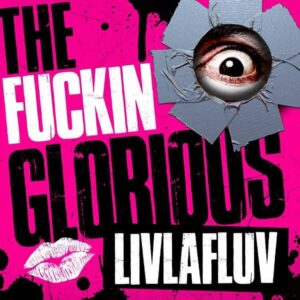 A composite of previously revered Yorkshire punk bands (Low-Life, Dead Pets) with all the bizarro imagery to match. Scene after scene of apoplectic lunacy but reiterates the sentiments of that unavoidable duality in all things bright and brutiful, embedded deep in the existential sediments of each failed day, but embodied here with critical vitality. Fabulous new single from The Fuckin’ Glorious, taken from their December scheduled full-length album LIVLAFLUV (see artwork). By Ryan Walker.

TFG could be: the geniuses guised as village idiots, the courtroom jesters spiking the punchbowl with lysergic licorice drips. They could be: the mad professors with a nametag on their straightjackets who climb walls to crack codes – still obsessed with time travel, still into the idea of imaginative infiltration of the crustacean’s mainstream shell, still fascinated by the Philosophy of Provocation, a force through the gas tracks of the rotten corpse of a worn factory horse, torn apart by the frustrations of the modern age with one half of the brain hanging upside down and the other half in constant hyperactive overdrive. Anyways, meet The Fuckin’ Glorious…

The band conceived of the song to be ‘dark, strange and camp’. Not a bad mantra to live one’s life by, in spite of indulging our daily online lifestyles in the medley of maddening devices which cunningly convince us that The Dark, The Strange, The Camp, are all features of a human being which come at us from all angles with their tentacles outstretched, lonesomely exploited as a point of empowerment through the self-promoting parables according to one’s keyboard capabilities, no matter what we click on or how far into the deep, dark sea we scroll. 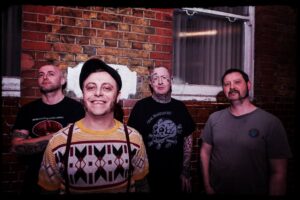 Mimicking the unpredictable twists and turns of what currently feels like one long day lingering over the nerves like something evil is pinching them between its margarine fingers, the disturbingly humorous and satirically sharp video is parts profanity and bastardized drama, parts savagery and satire, parts enlightenment and entertainment, whilst posting a letterbomb through the interface where Dead Boys and Kennedys, Dickies and Damned enjoyably disgorge in equal measures.

Music which doesn’t take itself that seriously; serious to the point of artistic elitism is the best kind of music. Because it can get away with murder and infiltrate imaginative territories that think of nihilism as a fashion statement rather than an entire state of mind. Unattainable on those icy, designer pedestals, paradigmatic of a certain atrocity exhibitionist chic, reciting the same old platitudinous vomit often making up the magazine column inches, unawares of the yellowing of the very lines in the fabric of society which sinks into itself all around them.

‘It’s summer and after weeks of warm weather the day we filmed it was strong winds and heavy rain’, says band guitar man Jimbo Baxter. The facial cosmetics; the golden trunks of a certain critical extremity, or disturbing mutation of identity, all confirm the hellish levels of unpredictability haunting every corner of our conscious thoughts, every crack in the wallpaper of the morning we are currently experiencing.

Another Mess lyrically challenges this same mood of the unknown but shows escape and hope’ – a term perversely, but appropriately, called Scapehope. And soon enough, I’m confident, this particular turn of phrase will be added to the already immeasurable stockpile of symptoms (amongst the aporia, the anxiety, the malaise, the paranoia, the toxic commodity noise, the extremity of contempt and enmity toward everything), in this ‘landscape of the broken age’, as a rather accurate summary of all that’s come before, gone wrong and washed up on, wasteland dogshit beaches of monotonous playdough rock ‘n’ apocryphal.

Sonically also, we aren’t short-changed with things to listen to. A playful and intricate and disorderly intermingling ensues throughout. A pre-Doyle Misfits hybridized with the cosmic circus colors, and ethereal flashes of an intensified Lords of the New Church which pounce forth mightily. A mutually dependent battle between blitzkrieg bass; which bullies fierce, firecracker drums; which have their intestines exposed and drop to the floor when sliced into by spikey, sideways pseudo-surf guitar – a marvelous thing of menacing bestiality.

All of which is crowned by the voice, raw like soil, hot like a boiling pot of tar, adrenalized and injecting a shot of venom in the fat vein in the thin neck of celebrity culture chumps,  increasing in heat and density with added harmonic unity to carry above their shoulders. Regularly frenzied when rolling around in their own nightmarish filth, expanding and catching fire at the top of the pile, in amongst everything else.

Another fine mess we’ve gotten ourselves into then. A fine mess made sense of by – The Fuckin’ Glorious. A Dark mess, a Strange mess, a Camp mess.