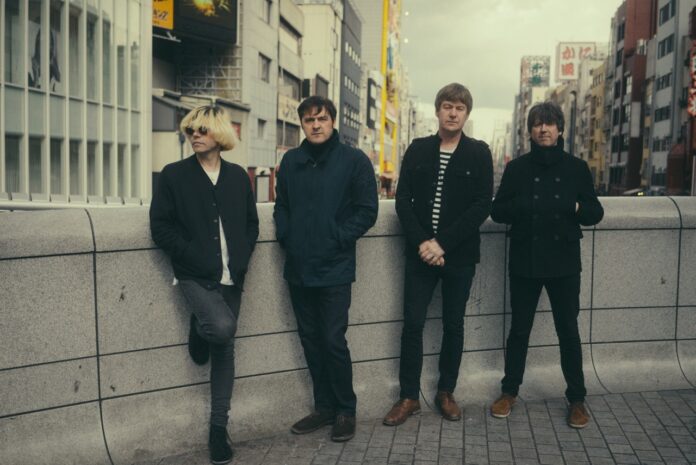 The Charlatans returned with their twelfth album, Modern Nature, back in January, an album which, in our 9 / 10 review, we described simply as “A remarkable affirmation of life”. They’ve now dropped a video for the latest single off it – Let The Good Times Be Never Ending – which you can watch above, while below you can find news of their upcoming Jools “boogie woogie” Holland appearance and the current list of festivals they’re scheduled to appear at.

The video above was beautifully shot by Libby Burke Wilde during the band’s recent tour of Japan and it cuts between the band sightseeing and playing live – with a bit of record buying and fan meeting thrown in for good measure. With its depiction of “everyday life” or “a day in the life of a band on tour” even it’s the perfect backdrop to song which has a kinda chill vibe too it with the band seemingly holding back. Along with all the usual suspects the single features the bands backing singers, Sandra Marvin and Melanie Marshall, and special guest ‘Big’ Jim Paterson from Dexy’s on saxophone.

“Let The Good Times Be Never Ending brings the album to a new peak. Scuzzier guitar, plenty of snare, bolder organ, that groove to the bass line again and a steady, confident vocal delivery. “We know each other, I get the love that you’re sending, Let the good times be never-ending” is beautiful, with that lyric given the space it needs by a funky, fast-paced instrumental trip out to the end. There is already a flutter inside at the thought of this emotional roll being given a raw edge when delivered live.”

The Charlatans have also confirmed that they’ll be appearing on ‘Later….With Jools Holland’ performing “Let The Good Times Be Never Ending” live in a weeks time, on Tuesday 28th on BBC2. So set the alarms for that, and they’ve also confirmed that they’ll be playing the following festivals this summer, with “more to be announced soon” we’re assured.