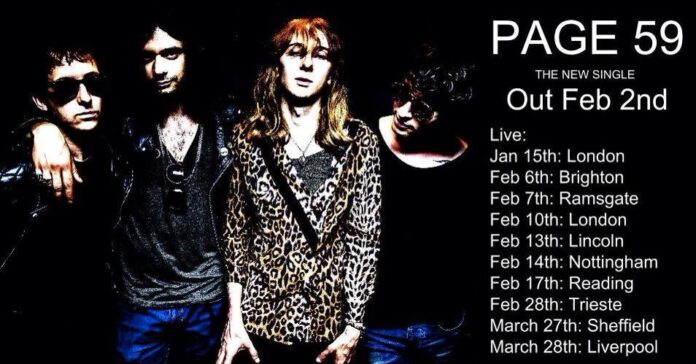 We described them recently as:

“…a cross between The Jesus and Mary Chain, (but bouncier, jollier, faster), The Ramones, Sonic Youth (the fast bits), The Sex Pistols (without the growling and shouting) and Swell Maps (better vocals / simular guitars). They may not realise this, but they are.'”

The single was released on Ra-Ra Rok Records on 2nd Feb 2015.

‘Page 59’, co-produced and engineered by Sean Read of The Rockingbirds, was recorded in London at the Famous Times studio in Homerton. Released on signed limited edition seven inch silver vinyl and available todownload, the new single also features the Oli Bayston (Boxed In) produced ‘Falling Down’ and is the follow up to the recent ‘Let’s Go’ and their debut ‘Time Traveller’, a John Kennedy ‘Xposure Record of the Week’.

Managed by ex-Food Records head honcho and former Blur manager Andy Ross, the CuT line up of Dan Fatal (Vocals / Guitar), Jimmy Johnson (Guitar / Vocals), Louie Johnson (Drums) and Jay Clifton (Bass / Vocals) are Inspired by beatnik and the DIY punk ethos of bands such as Rema – Rema and have emerged as one the most exciting new bands around.

Formed just over a year ago, their combined love of heavy fuzz and surf punk melody has endeared them to critics and public alike. They’ve had support from the likes of NME, Q, Clash, Artrocker and Line Of Best Fit and can count on the aforementioned John Kennedy and Steve Lamacq amongst their fan base. Indeed the BBC 6 presenter had them in for a session at Maida Vale in June and also hailed them as “the best live band I’ve seen in years”.

Having recently played Camden Crawl, Boardmasters festival and the NME /Jack Daniels sponsored sessions at the Macbeth, CuT will set out to confirm their amazing reputation as a live band at the following shows in January and February.