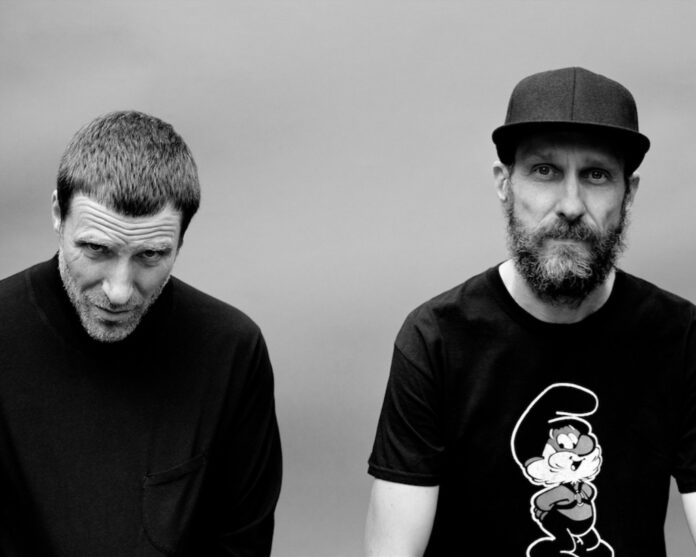 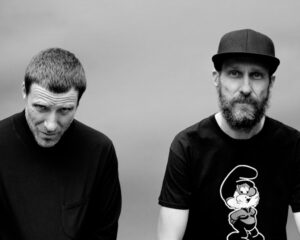 As the UK is split into a multi-tiered cake of confusion, Sleaford Mods re-emerge to lift the mood with a brand new single, Mork N Mindy. Andy Brown shares his thoughts for Louder Than War.

Mork N Mindy, the latest tune from Nottingham’s Sleaford Mods, has just crash landed (presumably from the planet Ork) with a Ben Wheatley directed video and a guest appearance by the-one-and-only Billy Nomates.

Chief beat-master Andrew Fearn pulls another effortlessly addictive, mysterious and minimalistic soundscape from his bottomless bag of tricks while vocalist Jason Williamson commits another lyrically dexterous, foul-mouthed and free-flowing performance to the Mods very own Hall of Fame. It’s a format we’re familiar with yet with each new release you can hear the progression. Nothing ever feels flabby, tired or excessive: each new track crackles with a fresh and subtly inventive energy. Breathe in deep that distinctive, box-fresh scent of a new Mods banger. And let’s face it, no one else sounds quite like Sleaford Mods. It pulls off that brilliant Mods trick of having a sense of humour while also sounding decidedly narked off. With another double dip recession on the horizon we need them more then ever.

It’s a tune that makes me feel like going on a night out (remember them?) while also managing to remind me of early mornings at my Grans as a kid watching Robin Williams emerge from a space egg in everyone’s favourite, intergalactic odd-couple sitcom. “Mork ‘n’ Mindy/ Action Man and Cindy/ I don’t mess about” begins Williamson as he rifles through a box of toys in the accompanying video, “I make them kiss each other when my Mum and Dad go out”. A sharp, surreal and nostalgic trip through childhood designed to evoke, “the sound of central heating and the dying smells of Sunday dinner in a house on an estate in 1982”. A young Williamson playing inside, watching Tiswas and wishing things smelt a little less like hell.

Tor Maries AKA Billy Nomates adds a new dimension to the duos sound, crooning the songs chorus in cool, semi-transatlantic tones, “too high/ too low/ it doesn’t make a difference I know”. It’s a genuinely exciting moment when the chorus kicks in for the first time. This is some next level stuff people, make no mistake. Williamson appeared on Maries’ superb debut LP earlier this year and it’s a real treat to hear them collaborate again.

The video was directed by Ben Wheatley. One of the finest British directors working today, Wheatley is responsible for such gems of contemporary cinema as Kill List, Sightseers and A Field In England. Wheatley has a knack for curating particularly brilliant soundtracks for his films so it’s no big surprise to see him making a move into music videos (plus, he introduced me to the wonders of Karen Dalton via his debut feature Down Terrace). His latest film, a new interpretation of Daphne Du Maurier’s Rebecca, even features a blink-and-you-will-miss-it appearance from Williamson.

All this bodes well for the new Sleaford Mods LP, Spare Rips which is due for release on January 15th 2021. The album see’s the duo back with Rough Trade and alongside Billy Nomates will feature the vocal skills of Amy Taylor from Amyl and the Sniffers. Another track features a contribution by sociologist and author of Getting By: Estates, Class and Culture in Austerity Britain, Lisa McKenzie.