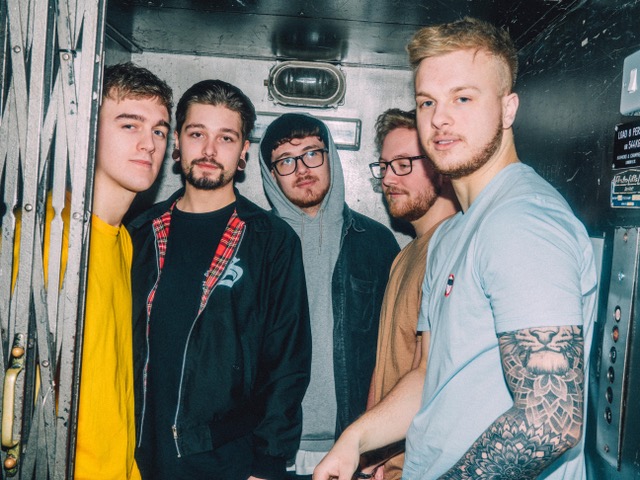 Sheffield-based alt-rockers Your Life & Mine wear their hearts on their sleeve in latest single Better End the Heartbreak. We caught up with them ahead of the release of their forthcoming debut EP, Emotions Aside.

With the Steel City finally managing to crawl out from underneath the shadow of its biggest exports, its refreshing to see a new breed of band eschewing the laddy machoism of ’00s indie rock in favour of something much more emotionally relevant in today’s social climate. Your Life & Mine are one such band. An alt rock five piece that would be more at home in the pages of Kerrang! than NME, the quintet offer an angsty and emotionally-loaded alternative to their native Sheffield’s indie heritage.

Their latest single, Better End The Heartbreak, focuses on identifying when a relationship has become exhausted. The song talks about being oblivious to a relationship that is falling apart and how some of us choose to look the other way to make life easier. We caught up with the band following its release.

Hi guys, thanks for answering our questions. You’ve just released your recent single ‘Better End the Heartbreak’. What have the reactions been like so far?

So far we’ve had nothing but positive feedback from it. From the beginning we’ve wanted this single to welcome people to our new sound and it seems to have worked better than we could have ever imagined, We’ve had just under 25k streams since the release and endless amounts of radio play on a number of BBC stations, it’s even found its way onto Kerrang a load of times as well. We’re now looking forward to seeing what people think to our upcoming single ‘Remind To Remember’ which will be released on 29th April 2019.

It’s taken from your forthcoming EP Under One Roof, which you’ve said “gives a hardened approach whilst also maintaining the YL&M vibe”. What can fans expect from the EP?

As you already know, ‘Under One Roof’ was inspired by the idea that everything we sing about in each song is something that everyone goes through in their own life at home. Not only did we want the release to be completely open to interpretation but we also wanted it to be as relatable as possible but in a way that assures its listeners that through the hardest times, there’s always something that will put a smile back on your face.

You’ve previously toured with bands such as We Are the Ocean and The Amity Affliction. What sort of things can bands at a similar level learn from getting out on tours such as those?

Not only can you form some of the best memories and tour stories but it’s also a massive eye opener to see how the time and effort that we put in as an independent band, pays off! It’s also a massive chance to make new friends and meet new fans that we never knew we had!

Do you find that playing with even slightly heavier bands can make it harder to win over new fans, or did you find them to be generally receptive?

This is a great question and you can look at it from two different angles, we usually feel like playing on a heavier line up can sometimes work well for us as it helps us to stand out from the rest of the lineup and a lot of the time we get an amazing reception, but other times the lineup doesn’t seem to work very well and we spend the entire set receiving questionable looks.

Speaking of tours, can we expect any live date announcements soon?

You sure can!! expect a big list of live UK dates to be announced within the next month!

Finally, EP release aside, what can we expect from Your Life and Mine over the rest of the year?