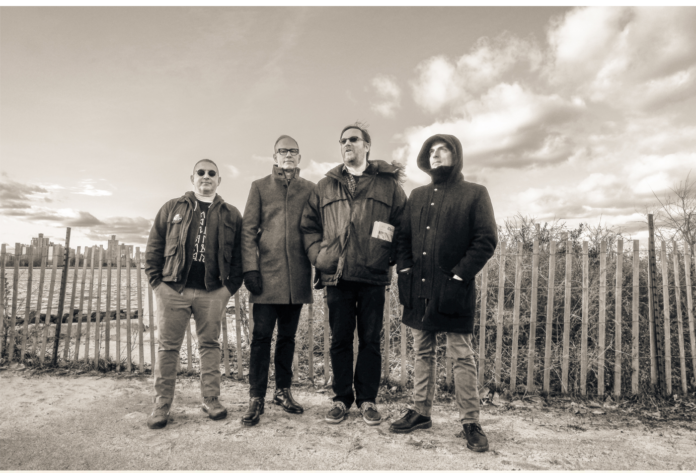 Very good.cA mysterious slice of post-punk with a shiver of Wire’s post-punk pop exploration from their early period. A wonderful slice of melancholic melody and great guitar lines – a piece of perfect guitar pop that you simply must hear…

YOU CAN PRE-ORDER HERE:

Brooklyn post-punk mainstays SAVAK have announced their fifth album, Human Error / Human Delight, which will be released on April 15, 2022, via Ernest Jenning Record Co. in conjunction with the band’s own Peculiar Works.

SAVAK is the two-headed beast of Sohrab Habibion and Michael Jaworski, with Matt Schulz on drums. Jaworski and Habibion have been sharing singing and songwriting duties since the band’s inception in 2015, both taking turns singing their songs while playing guitar and other various instruments. Though SAVAK’s members have done time in bands like Obits, Edsel, Holy Fuck and more, their current outfit feels like the true culmination of their songwriting powers.

How do we hold onto hope when we live in a time of unending crisis? Does love have any value if the planet is dying? Is there any justification for producing an album during a global pandemic? On their fifth full-length, Human Error / Human Delight, Brooklyn-based rockers SAVAK grapple with questions no less fundamental than these. They may not find concrete answers, but the exploration itself proves remarkably fertile.

Today, Savak return with a new single from the album titled ‘Recanted (Free the Singer)’, a song crafted in the full glare of the covid pandemic…

“I recently found the original lyrics I’d written for this song—there were references to bad-faith investments, setting traps and chasing one’s own tail,” explains Sohrab. “It was the height of my own pandemic malaise, having recovered from COVID, closely monitoring the spike in positive case numbers, watching our governor at the time try to dazzle us out of our fears with self-aggrandizing speeches, while bodies were being kept in refrigerated trucks around the corner from my apartment. It was bleak. Hence the opening lines, “So much that was said was just to fill in the gaps while we buried our dead.” Later in the song I tried to come to terms with the trepidation of seeing strangers on the street, in the empty grocery stores, on the F train: “So much that we dread is ambient misunderstanding that occupies our heads.” Meanwhile there’s a parallel thread that alternates with the temporal concerns; one that ruminates on power, control, and our unsatiated hunger to correct people publicly. In a world that has no time for small gestures and subtlety regularly goes unrewarded or ignored, this song hopes we can figure out a way to bring voices from the margins into focus and “free the singer.”

For the video for ‘Recanted (Free the Singer)’, which you can watch HERE, the band recruited the help of DC punk legend Ian Svenonius (Nation Of Ulysses, The Make Up, Weird War etc) to perfectly capture the stilted discomfort in the song.

“He filmed himself in the style of Dylan’s Subterranean Homesick Blues, replacing the garbage-strewn London alley with a blank wall and a touch of Alan Vega’s brooding presence,” says Sohrab. “I crudely cut his footage into an old ad for a tv remote control, projected it and re-shot it on my teenage son’s friend’s Hi-8 camera (thank you young skaters for keeping this format alive!). Hopefully it remains entertaining for three minutes!

“One quick note about the music: it’s basically one riff the whole time. Our drummer Matt quite astutely requested a break from this two-chord monotony, so you’ll catch a short bridge about halfway through. But my goal was to pull off a trick Wire, and occasionally the Kinks, do so effortlessly, which is to use the same chords for the verse and chorus, allowing for the vocal melody or phrasing to distinguish between the sections. Again, “free the singer.”