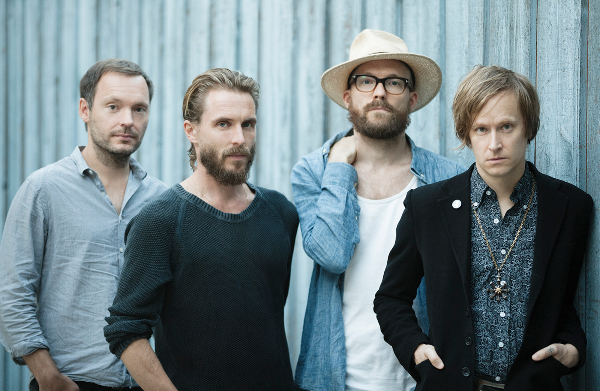 With their highly anticipated new album ‘Freedom’ due out June 29 via Epitaph, Swedish hardcore heroes Refused have released a new video for the track Dawkins Christ off it. Check it out below, along with more info about both the video itself and the new album.

Refused’s 1998 album, the opus The Shape of Punk to Come, stands firm in many people’s lists of “greatest album ever” – a towering work of anger, bile and riposte, it’s also an album that helped define a genre. Sadly tho, shortly after the release of that album the band broke a 1000 hearts by announcing they were breaking up with the emotive words “Refused Are Fucking Dead”.

The band came back together again in 2012 for a reunion tour with all suggestions, initially, leading people to assume it was for nostalgic reasons alone (if not a cash in) and there being no suggestion, initially, that they’d release new work.

That soon changed though, apparently, as four months into the tour they began “contemplating” new music, and now, 3 years later it looks like the fruits of contemplation are finally to be borne in the shape of the album Freedom.

About all the above frontman Dennis Lyxzén has said:

“It’s not a reunion anymore. This is one of the most radical things we’ve ever done, both musically and lyrically.”

Yesterday Refused dropped a new video for the track ‘Dawkins Christ’ off the new album, about which drummer David Sandström says…

“The title [Dawkins Christ] refers to the famous biologist whose atheist theology has inspired a semi-cult who in turn sees him as a messianic figure, an irony that partly inspired the lyrics. The music draws from the film scores of Hans Zimmer and Ennio Morricone as well as pre-Reign in blood Slayer.”

The band are playing Reading and Leeds in August, but other than that have no other UK dates lined up yet.

You can find Refused online here: officialrefused.com and on Facebook.