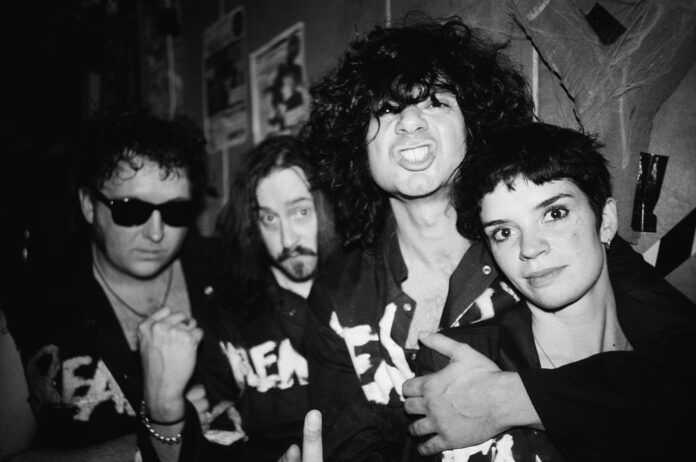 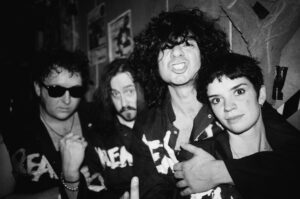 REAL(s) provide the soundtrack to the chaos of the early 21st century’s struggles on new album D.S.L.B. The band’s formation was inspired by the writings of Mark Fisher, Capitalist Realism.

This book is at the heart of the band’s identity. Readings are delivered at live shows, where REAL(s) take over stages with a revolutionary fever. Our age of climate change, global social economic political upheavals ring out in the frequencies that REAL(s) evoke.

Forming the art collective D.S.L.B (Deep Song Love Bomb) in London, Dan Fatel (vox/guitar) Louie Love (Drums), Jimi Scandal (Guitar) Gabi Garbutt (Bass) use all forms of art & creativity, combined with a collection of philosophies including Lorca’s Duende & DaDaist surrealism, seeking to highlight the inconsistencies and cracks in the facade of reality, conjuring a breaking in the chains of our past so we might step into a future that has long been unclaimed.

Their video for the song Radiation is a Tory-baiting anarcho-punk masterclass in dystopic propoganda that bites hard into the reality we are living, one in which the puppet masters and their charges rally false prophets to inspire brainwashed acolytes while the world burns around them. Lies are laid bare, clowns are demasked, the Fagins are explosed.

Last year, Keith Goldhanger covered them in his monthly round up of new tunes, describing their sound as raw, loud, fast and thrilling and will be pleasing to the ears of those of you partial to a bit of Sonihttps://louderthanwar.com/things-we-didnt-know-a-month-ago-may-2018-2/c Youth, Ramones or Clash anthems. His review of their debut full album is in the works. For now we will have to be content with the cracked mirrors that the band are holding up for us to gaze through.

Their debut album, D.S.L.B. will be released on the 3rd November 2020 via Music As Insurgent Art Records.

It is available now on preorder.

Watch this! The Anchoress releases second single Unravel from her forthcoming album.

December 5, 2020 0
Unravel is the second song to be released from the forthcoming The Anchoress Album, and arrives with...
Read more

Watch this! The Anchoress releases second single Unravel from her forthcoming...