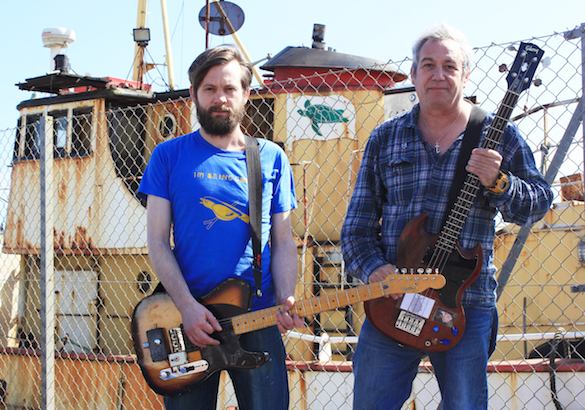 Cuz, the band formed by Mike Watt (mighty man of bass and mighty man of Minutemen, fIREHOSE, Stooges etc fame) and Sam Dook (of Go! Team) are releasing a new single off their critically acclaimed album Tamatebako which came out earlier in the year. It’s titled Houdini and is due out on 6th October. Check out the video, which we’re thrilled to be able to premiere for you today, below.

When we spoke to Mike earlier in the year he explained to us how the album came together – and why it took so long to see the light of day! Watt was over here mainly playing festivals so there was a bit of time in-between needed killing so…

“I took a train to Brighton from London and we just jammed for three days … I said to him (Sam) to take pieces and we’ll be the samples. So he’s going through these pieces of music and finding little licks, me on the bass, him on the drums. Then, from Pedro I was sending stuff too; spiel, more bass, bass solo and he could add (it) on, all kinds of stuff … and he asked friends too. So that was the whole idea.”

“He’s (Sam again) been touring so much that the proj is six years old now, something like that …”

The album marries together Sam Dook’s pop sensibilities and eye for a catchy tune with Brother Mike’s more “out there” musicianship – and stunning bass playing of course – and wonderful throaty growls. Both singles so far have been from the more accessible end of the Cuz spectrum, which is how it should be of course – with the singles being little adverts for the album, their job is to hook people into buying the LP from where they can dive into the more experimental tracks on the album which, to me, is where the albums joy lies.

Houdini itself is a wonderfully fun blend of found sounds melded together into a typically carnivalesque jazzy meets indie-pop spree, all overlaid with playful melodies that can’t help but draw you in. The vocals come mainly from Sam Dook on the this track but Watt’s growl pops in a few times, as was requested. The musicianship all the way through, as you might expect, is exemplary.

About his part on Houdini Watt elaborates:

“….when brother Sam sent me what he put together from our July 2008 jams for this tune w/ that title and asked for a rap from me for one part, I thought right away of my Houdini connection, to come up w/ some words. See, I was on a U.S. tour in the late 80s and after the Detroit gig (I think we played Alvin’s by Wayne State) some kind cats invited us to konk at the music school they lived at not far away. Turns out this music school was in a pad that was a funeral home. It had pianos and music stuff but there was also stuff left from its former business, downstairs in the ‘washroom’ or whatever…. I laid out my konk sack in this shallow tiled tub. I didn’t really realize what it or the stuff in the room was really about ’til in the morning when our hosts enlightened me to the fact that Houdini had his last work done on him there. Maybe he told me Henry Ford also, I can’t remember well but Houdini for sure – I found this: detroit1701.org/ArtCenterMusic.html.”

The other two tracks on the single are The Lighthouse Keeper and Tokyo Gnarl – Cuz featuring Floattt with Imon Starr – and the whole thing can be streamed here.

Visit Bleeding Heart Recordings for more info: bleedingheartrecordings.com and to purchase the single after 6th October.