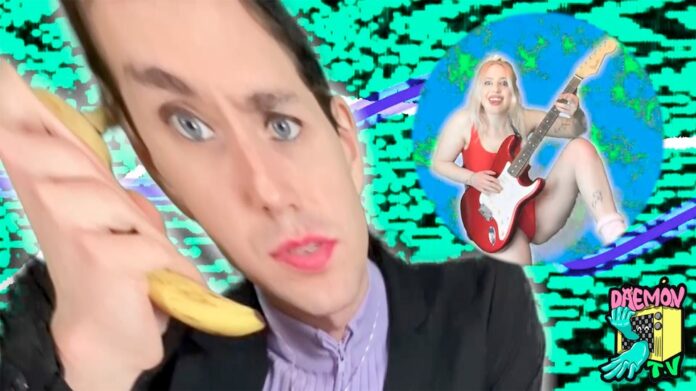 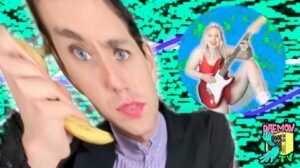 It was probably only a matter of time before pop misfits Du Blonde and Ezra Furman teamed up on bonkers new single I’m Glad That We Broke Up.

The woozy, psychedelic video features Du Blonde – aka Beth Jeans Houghton – and Furman in a riot of colour, and is the second single from her new album, Homecoming, released on her own record label, clothing brand and all-round art house Daemon T.V. Homecoming was written, recorded and produced by Du Blonde who has used her cult status to recruit an all-star cast of collaborators including Garbage’s Shirley Mason, Andy Bell (from Oasis, not Erasure), The Farting Suffragettes, members of Girl Ray, plus Tunng as well as Furman.

“Me and Ezra had so much fun making this track we wanted to relive the experience by setting up greenscreens in our houses,” says Beth. “Hope you enjoy this trash pizza served up on a cold hard plate of digital diarrhoea. The record was low budget, so it seemed fitting for the video to be low budget as well.’

Ezra Furman has fun on the cheesy MTV inspired video, also directed by Du Blonde, taking lead vocals as she dresses up in a series of eccentric eighties outfits.

“Art is the meeting of an army of mewling demons and an army of light,” opines Ezra Furman. “We Live and Love in a video culture of sin. The Sinternet is a World Wide Web of toxic relationships and bad mojo. We made this as an antidote to snake venom.”

Since her last album Lung Bread For Daddy in 2019, Beth has decided to go down the independent routes citing the lack of control over her work and career that saw her mental health deteriorate.

“I’ve always felt that the music industry as it stands is weighted more towards record labels than artists. There’s an element of gaslighting involved, a whole ‘you’ll be nothing without us’ vibe that keeps you in the system because you think you might fail without it. But I woke up one day and was like ‘I’m broke, I’m stressed and depressed, I don’t own the rights to my music and I have to buy my own albums for close to full price if I want to sell any at my shows’.”

She created Daemon T.V. which was originally created as a platform for Houghton’s clothing designs – she had planned to be a fashion designer before “accidentally” becoming a musician at 15 – but the move into a record label for her music seemed like a natural progression

“For a long time I’ve wanted a platform for my artwork, clothing and any weird EPs I might make outside of the Du Blonde name,” Houghton explains. “When I was a young kid I planned to open a record store with a bagel counter. I was like ‘I like records, I like bagels, here’s both’.”