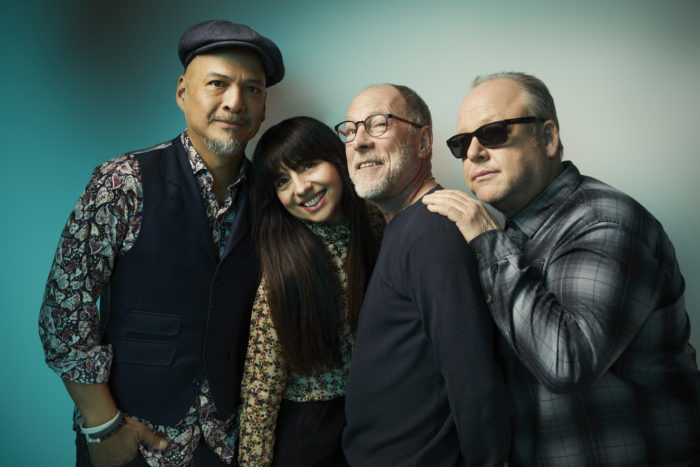 Pixies are back and as rocking and bonkers as ever with the brilliant On Graveyard Hill.

You are about to enter a hallucinatory space populated by witches and psychics, tarot cards and crystal balls, madness and trepidation, and a harrowing ride in a hearse driven by a Hell Hound.  During this cosmic trek, you will likely slide into infinity, a place where the “eerie” and “magical” seem to be part of the very air.  No need for psychedelics to tune into what you are about to witness.  Just sit back, click PLAY, and take a mind-bending plunge with Pixies‘ new music video.

A tip of the hat to film director Kenneth Anger, the ‘On Graveyard Hill’ video was conceived and directed by Kii Arens (Devo’s ‘What We Do’, Queens of the Stone Age’s ‘The Vampyre of Time and Memory’) and Bobbi Rich and shot in Los Angeles.  Said Arens, “Directing for the all mighty Pixies is quite an honor, and I was given complete artistic freedom to do what I wished.  The freedom to do so makes sense as to why they are such an original, real deal band.  I started my career in music creating rock art so it’s perfect for this psychedelic freak-out video release.”

‘On Graveyard Hill’ is the first track from Pixies upcoming album ‘Beneath The Eyrie’ (BMG), produced by GRAMMY-nominated Tom Dalgety, and due out September 13th.  Episode Four of the 12-episode ‘It’s a Pixies’ Podcast‘, where the band pulls back the curtain to shine light on the album’s recording process, will post globally this Thursday on Apple, Spotify, Acast, Stitcher, Google and other podcast platforms.  The band – Black Francis/vocals, guitars; Joey Santiago/guitars, David Lovering/drums, and Paz Lenchantin/bass – will support the album’s release with an extensive 2019-2020 world tour that will launch on Saturday,  August 31 at the Daydream Festival in Pasadena, CA.  This will mark the first time the band has shared a stage with the festival’s curators The Cure in 30 years, the first time being in 1989 at L.A.’s Dodger Stadium.  Pixies will then head to the UK for its first European tour in two years, that begins September 13th.  Further worldwide dates to be announced shortly.