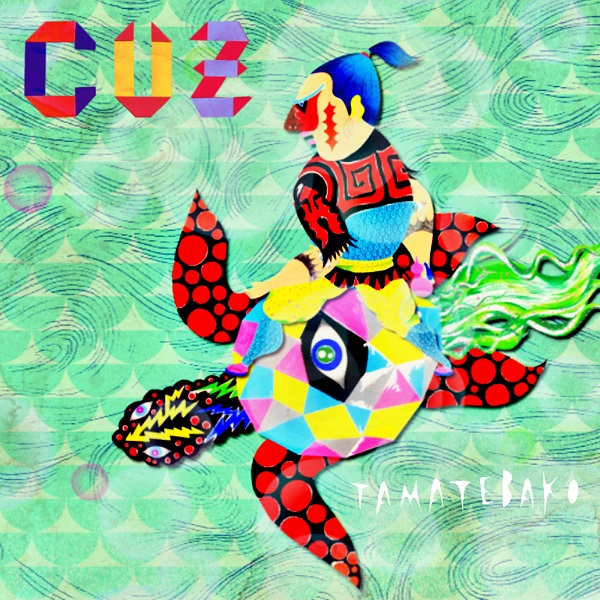 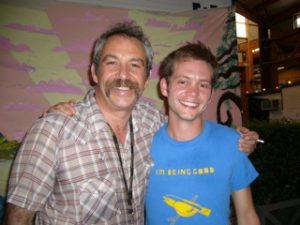 New music from the ever-brilliant Mike Watt, he of Minutemen, fIREHOSE, The Stooges, Dos, Hand to Man Band and more is always a cause for celebration. This time it’s coming out under the banner “CUZ”, a collaboration with Sam Dook, he of our very own The Go! Team. The first video from the partnership was recently released – scroll down to check it out. Mike Watt’s also currently in Europe with The Missingmen playing his third opera “hyphenated-man”. They’ll be hitting UK shores from 9th April, the full list of dates can also be found below.

CUZ’s album, ‘Tamatebako’ is billed as “a conversation taking place over nearly eight years and several continents.” It’s due to be released on Bleeding Hearts Recording on May 12th (although a special limited edition (200) ‘tamatebako-box’ vinyl for  Record Store Day will also be released on 19 April 2014). So far all we have to judge it by is this one video and early indications are that it’s a wee departure from most of Mike’s previous output, having, as it does, a seriously fun, bouncing almost pop rhythm to it; albeit one that’s founded on Watts inimitable bass playing. One would struggle to imagine Stooges playing this, certainly, let alone the Hand To Man Band; although with the direction Minutemen were moving in just prior to D Boons untimely demise one could quite possibly almost imagine them having ended up as a band not a million miles away from Cuz. “Project Mersh” finally reaching its logical conclusion? Discuss…

We’re told about the partnership:

Watt and Dook first met in Australia in 2006 when both The Stooges and The Go! Team were playing at The Big Day Out festival.

“Mike was being loud and friendly, dousing his festival food with home-made Watt Chilli sauce straight out of his chilli belt holster” says Dook.

And of the album we’re told:

Weaving eclectic influence, from Japanese folklore – the ‘tamatebako’ is a Pandora-style box featured in the ‘Urashima Tarō’ legend – through ancient British landmarks, to personal loss, into a heady mix of whisky-gnarl, motoric riff, thrift-store percussion and toy synth, the effect is a tight, groovy, ever-elusive, outsider pop. Vocals come from both Watt and Dook, often within the same song, presenting an unlikely pairing of throaty drawl and choir-boy purity that works magnificently. Guest vocals come in the form of the esteemed beat writer Charley Plymell, and Kaori Tsuchida (The Go! Team), amongst others.

The video features the title track of their forthcoming album. The song re-tells an old Japanese legend about a young fisherman named Taro. The mysterious story tells of his adventure saving a turtle from danger and visiting a strange kingdom under the sea. This age old tale is retold in the song by guest vocalist Kaori Tsuchida (The Go! Team). The video was created by Japanese animator and illustrator Hideyuki Katsumata who has created videos and artwork for amongst others Swedish band ‘Little Dragon’.

Music and video fit each other perfectly providing a whole guaranteed to leave you feeling kinda warm inside.

More about Cuz can be found on Bleeding Hearts Recording’s Website. 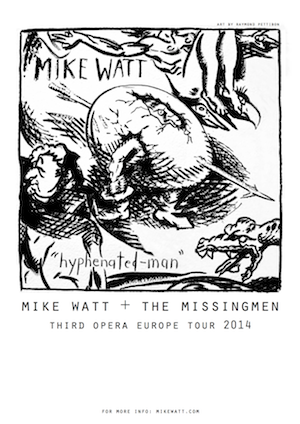 Watt’s also headed to UK shores soon touring as Mike Watt + The Missing Men for the second “Third Opera Europe Tour”. Taking in around fifty dates (full details here) it hits Brighton on Wednesday, April ninth and travels to ten more cities after that. Full list of shows below the Cuz video, but first, here’s what Watt has to say about this tour:

Second time to get my third opera “hyphenated-man” on over to Europe w / my Missingmen which is Tom Watson (on guitar) plus Raul Morales (on drums) and play it for folks who didn’t get a chance before – actually it’s a repeat visit w/the piece for only four of the towns on this tour. Having already toured it in japan in 2010 and twice in the u.s. during 2011 (along w/canada) and 2012, this is our fifth time we sally forth to work this for people so you can imagine w/know our way around this piece more than we ever have but at the same time it feels real fresh cuz it’s been a year and a half since we toured it and also looking forward to bringing it to lots of towns the missingmen have never been before, very happening and most exciting for us! ganbaro!