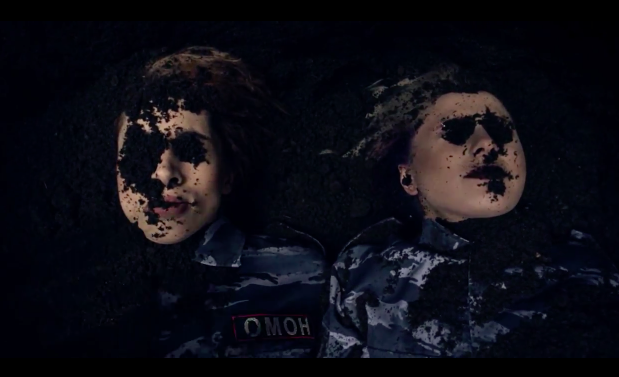 Pussy Riot have just released the above video for the track I Cant Breathe. Be warned though, it’s a hard hitting, intense and powerful watch as it depicts Nadya and Masha being buried alive while wearing the blue uniforms of Russia’s OMON riot police.

The song, their first in English, is inspired by a recent trip to New York and the death of Eric Garner at the hands of an NYPD officer. The video shows solidarity with US protesters against police brutality and is also a political statement against Russia’s own notorious law-enforcement officers.

“I Can’t Breathe” are the words Eric Garner repeated eleven times before his death. As it explains on the Youtube page:

“This song is for Eric and for all those from Russia to America and around the globe who suffer from state terror – killed, choked, perished because of war and state sponsored violence of all kinds – for political prisoners and those on the streets fighting for change. We stand in solidarity.”

Tthe Russian riot police uniforms that Pussy Riot’s Masha and Nadya are being buried alive in are worn during the violent clashes of police and the protesters fighting for change in Russia. A pack of “Russian Spring” brand cigarettes is on the ground at the beginning. “Russian Spring” is a term used by those who are in love with Russia’s aggressive militant actions in Ukraine, and the cigarettes are a real thing.

“I Can’t Breathe” was recorded in New York in December 2014 during the protests against police brutality together with Pussy Riot, Richard Hell, Nick Zinner, Andrew Wyatt, Shahzad Ismaily (The Ceramic Dog) and Russian bands Jack Wood and Scofferlane.

The lyrics are also printed on the YouTube page and are as follows:

He’s become his death The spark of the riots
That’s the way he’s blessed
To stay alive.

It never leads to an end
It’s never getting quiet
If it’s unfair, my friend,
Make up your mind

We’re only half way down
Who dares to take a breath?
Some fairness might be found
From ashes of his death.