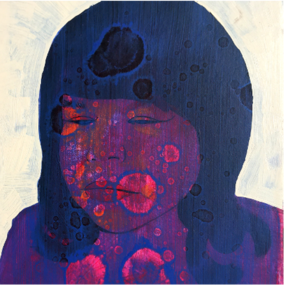 Samantha Crain unveils Bloomsday, a song inspired by the Native American singer-songwriter’s experience of rediscovering her hometown when she returned to rural Oklahoma to sit out the pandemic.

For most of us, the brief history of Native American artists in popular music tends to begin and end with Jimi Hendrix. Unless, like me, you’ve been to the Museum of the American Indian in downtown Manhattan where there is an entire room dedicated to the famous Native Americans whom history has tended to forget.

Hendrix was part-Cherokee, as were blues legends Charley Patton and Champion Jack Dupree, and Rita Coolidge, while Robbie Robertson of The Band has Mohawk heritage. A handful of other notble musicians are drawn from different tribes: Link Wray (Shawnee), Willy DeVille (Pequot), Marty Robbins (Paiute) and Buffy Sainte-Marie (Cree).

To that list should be added Samantha Crain, a young Choctaw musician who has been quietly making a name for herself with her passionate, personal songs, often about the less fortunate in society, set to music that has one foot in indie music and another in Americana, along with a strikingly original voice.

Hard to categorise, she has toured with Neutral Milk Hotel as well as First Aid Kit, Deer Tick and Josh Ritter, picking up various Native American Music Awards along the way. Her sixth album, A Small Death, released on British singer-songwriter Lucy Rose’s label Real Kind last summer, earned her a nomination as Artist of the Year for this year’s International Folk Music Awards.

It was a remarkable comeback for Crain, who had been bedridden for 18 months after an unfortunate (and scarcely believable) three car accidents in three months at the end of  2017, following the release of her previous album You Had Me At Goodbye.

The last of those car crashes left her with no feeling in her hands and prone to panic attacks, prompting the onset of depression and the fear that she would never again be able to hold her instrument – the guitar – as well as being broke from her medical bills.

Happily, she recovered enough feeling to be able to play her acoustic guitar again, and poured her emotions into the songs on A Small Death, released last July. Now comes a new EP inspired not directly by her health but by the pleasures of rediscovering her hometown.

Crain was raised in a small town in rural Oklahoma that is home to several Indian tribes, including the Choctaw, and recently returned there to sit out the pandemic – a visit she describes as “vacationing in my own backyard.”

Rediscovering its long-forgotten corners proved to be fertile inspiration for her songwriting and the result is an EP with the self-explanatory title I Guess We Live Here Now, out on 9 April, again on Real Kind Records/Communion.

Bloomsday, incorporating elements of an old Gospel song called This Little Light Of Mine, is the first fruit – accompanied by this lovely video. “I felt like a tourist in my own town,” she says. “There were alleyways I’d passed every day that I’d never noticed, flowering bushes that I’d never glanced at, and craftsman houses with porch cats and gardens… parks I’d never walked to the centre of, trails I’d never walked, public statues I’d never turned towards.”

Crain’s only scheduled date in 2021 is in the UK, at the Black Deer Festival in Tunbridge Wells, on 19 June.