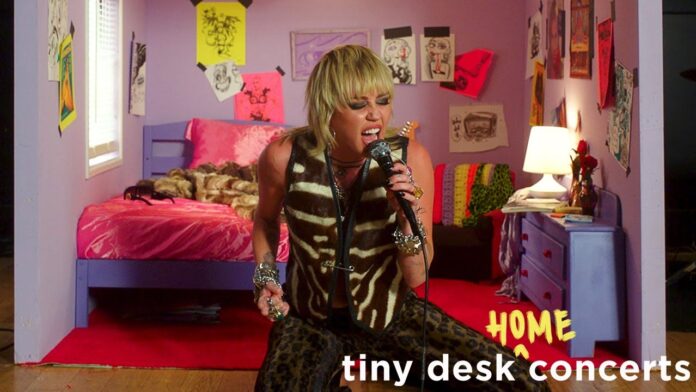 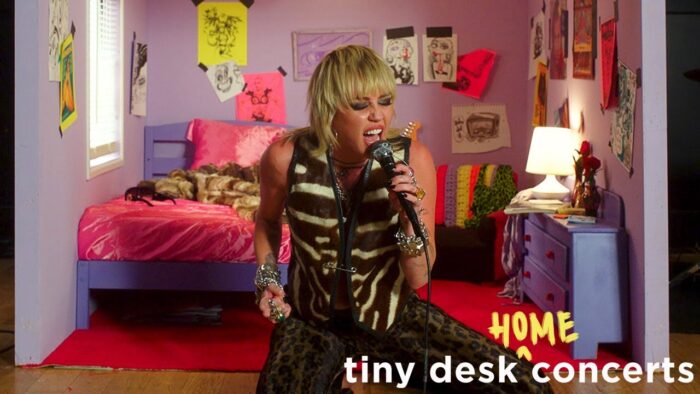 Miley looked like a rock god from the moment she sauntered onto a tiny replica of a teenager’s bedroom wearing a cowboy hat, shades and a long fake fur coat.

Her version of Fade Into You started with a vocal reminiscent of Hope Sandoval’s original version, but really rocked up the chorus with her distinctive rasp which might have sent Mazzy Star’s more sensitive fans running for the hills. But it worked because like all great covers it found something new in the song, and continues Miley’s great run of recent cover versions from Blondie to Hole.

Stripping off the faux fur she launched into a heartfelt version of Golden G-String, dropping to her knees to offer an indictment of the creepy orange moron who has just been kicked kicking and screaming out of the White House. Miley has been a long term and vocal critic of Trump’s intolerance in a way that shames many other acts who have remained silent during the last four turbulent years.

Miley ended the set leaving the tiny bedroom to join her regular band for a solo version of Prisoner she recorded as a duet with British pop megastar Dua Lipa.

This was a massive coup for NPR to book Miley, who wanted to support a progressive TV station that remains one of the last bastions of sanity and facts in a US beginning to regain its dignity.