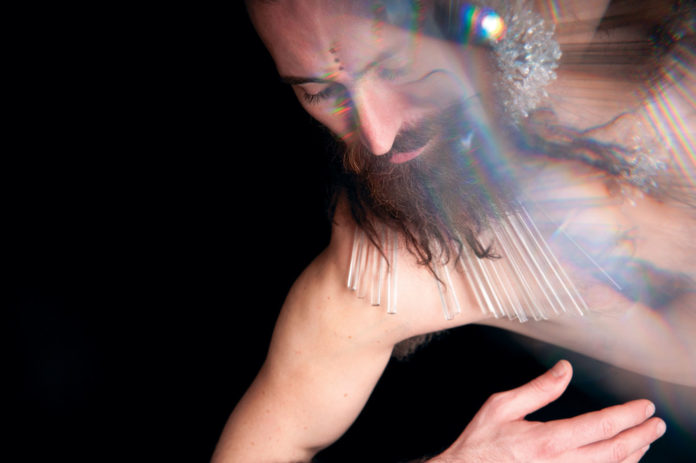 Taking a friendly trip all the way over to America’s Eastern seaboard, we visit the audio-visual offerings of confessional singer-songwriter Luis Mojica for his song ‘City Friends, which can bee found on his new album ‘How A Stranger Is Made’, to be released in early October.

The scenario, filming and direction for this video were all handled by by Mojica himself. Video editing was performed by Joel Patterson at Mountaintop Studios in Petersburgh, NY. His vocal standout and melodicism is quite pronounced, blending with the punctuated piano work and spacing that makes this whole song fit together like a fantastic sonic puzzle.

“I wrote this song while walking in NYC’s East Village. The St. Mark’s bookstore had just closed, my favorite tree in Washington Square Park was severed in half, and all around me my beloved neighborhood was changing so rapidly. I walked around feeling so much loss and, this song, became a container for me to pour all kinds of loss I had experienced into it. The loss of friendships, lovers, cities, cultures, identity of self. I finished the song years after leaving the city for Woodstock, NY. You can hear a duality in the track: a somber, lonely piano and vocals against an upbeat drum and then a full on ecstatic sounding chorus. It was my way of celebrating the loss, the gentrification, and the betrayal – in hindsight. It all brought me to a new life that was much better for me. So I became grateful for the forced growth and transformation,” says Luis Mojica.

‘How A Stranger Is Made’ follows up Mojica’s first studio album ‘Wholesome’, released in August 2016 after two years of touring with theavant-garde cello band Rasputina. He toured this album, which features his unique style of live looped beat boxing and rich vocal harmonies, both as support for Rasputina and as headliner. The album’s limited pressing sold out quite quickly and now is only available digitally.

This long-play will be a welcome discovery for fans of such artists as Devendra Banhart, Tori Amos, and Laurie Anderson and Amanda Palmer. Of these, his piano-vocal style leans closer to Tori Amos, while being totally unique unto himself. This is complex yet sensitized urban piano pop – the kind you would be happy to share with a friend, your cousin or total stranger and feel comfortable that they’re probably going to appreciate it.

About the video, Mojica writes, “I asked 25 of my friends in Woodstock, NY to each lip sync one line from the song to create a diverse cast of individuals threaded together with the same sentiment: “I lost something”. The song, originally about NYC, became an anthem for us in Woodstock as we’ve experienced so much change in class, culture, and business. Woodstock is quickly evolving and that old, messy, timeless wild that attracted us to the area is disappearing. I shot the video at the last dive bar, now closed and abandoned, that graced Woodstock’s main street. The video features all locals of Woodstock, most of them my dearest friends, as an almost anthropological project to preserve and document this fading era of people and place”.

A pianist and vocalist now based in Woodstock, New York, Mojica began developing his unique musical style in the crowded apartments and crumbling theaters of NYC’s East Village. In 2012, he moved upstate to the mountains of the Hudson Valley, where he’s become renowned for both his holistic healing work, as well as his musical compositions.

Luis Mojica’s ‘How A Stranger Is Made’ album is available everywhere as of October 4 and can already be pre-ordered here.

Also enjoy his most recent video prior to that for ‘The Ranger’: