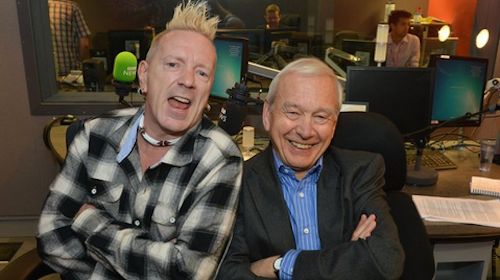 The longest running current presenter of BBC Radio 4’s flagship news program, Today, John Humphries (who you may also know as the question master on BBC1’s Mastermind) spoke to John Lydon this morning about his and the Pistol’s legacy amongst other things. In the process of the discussion John Humphries was called “a silly sausage” on radio for the first time ever apparently!

John Lydon was also asked by Humphries about the aims of punk rock, his “direct assault on mediocrity” and why we will never see Sex Pistols: The Musical.

John Lydon is taking part in an “in conversation” in Manchester tonight, full details here.

Louder Than War have interviewed John Lydon a couple of times in the last two years, find one by Ged Babey here and one by Ettrick Scott here.

Watch the whole program over on the BBC’s website here: bbc.co.uk/news/entertainment-arts-29540999.