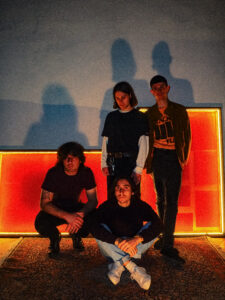 Italian psych quartet a/lpaca have released a new video for the title track of their debut album, Make It Better.

Hailing from the city of Mantua in northern Italy, the country’s 2016 Capital of Culture, a/lpca were formed by Christian Bindelli on vocals and guitar, Andrea Verrastro on bass, Andrea Fantuzzi on keyboards and Andrea Sordi on drums. The band state that they aim to express their vision of “beat music” through a magnetic and nervous sound. “The use of the “beat” has always characterised humanity and has spanned the centuries, changing shapes but not its substance. In Make It Better the “beat” is an impersonal spirit that advances like the cold vocal lines and guides towards a sort of artistic emancipation. The beat is also a means of aggregation and purification from the “responsibilities” of the real life and the transition from youth to adulthood. Finding refuge in music or simply going out with friends”.

On the latest sample from their debut album, the band have produced a slab of pulsating psych krautrock that sees them lining up well against their French contemporaries Slift. There is a deep groove beneath the pounding and hypnotic modulated guitar, filtered vocals spouting a simple message.

They make no bones of showering their music in the influence of their heroes. There are waves of Pink Floyd and Soft Machine (directly honoured on the album with the song I Am Kevin Ayers) wrapped up with lashings of Can and Neu!, and all served up on a platter of modern garage-psych akin to Osees and King Gizzard & The Lizard Wizard.

The single Make It Better is released this Friday.

The album is due for release next month in the UK on the Manchester-based DIY label Sour Grapes, in Italy and the US on the We Were Never Being Boring Collective, and in Germany on Sulatron Records.