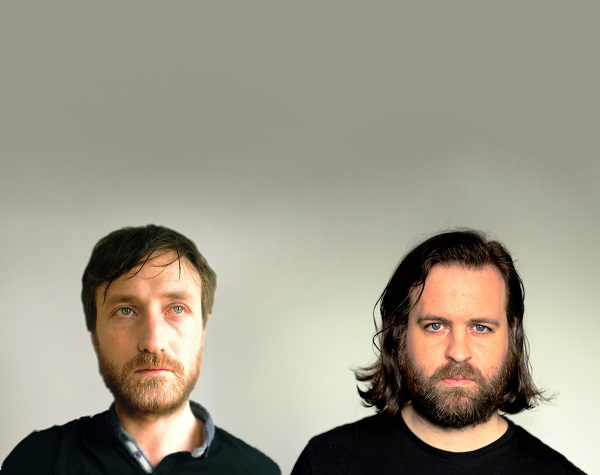 archmotors are Sean Lynch and Gary Landers, multi-instrumentalists from the West coast of Ireland who inhabit a world of dark humour and modern isolation: theirs is a dystopian present with an optimistic future. A world where the horror lives next door to hope, where worst-case scenarios are abated by our connections. It’s not all bad: there’s a monster under the bed, sure, but it’s just as afraid of us as we are of it.
Forthcoming project The Swimsuit Edition is a collection of stories told through sometimes minimal, sometimes maximalist instrumentation, the album ebbs and flows as intense, occasionally uncomfortable listening.

Whetting our appetites is the new single Sitcom, their second single to date and produced by Darragh Nolan (Sacred Animals). A satire on modern times told through their darkly emotive lens, the duo spin a melancholic commentary driven by their gloom-twinged mix of indie and post-punk. It’s delivered with an air of nostalgia, which pairs perfectly with the music video – a classic 90s ‘point and click’ style music video that grips you from the very start, matching the subtle musical tension.

Speaking to the motivation behind Sitcom, archmotors share:
“Sitcom is essentially a take on the modern pursuit of narcissism as entertainment. It’s asking where our insatiable appetite for a celebration of the self is taking us, and if this monoculture really has the effect of homogenising instead of liberating us: now you can express yourself any way you want as long as it’s a smiley. It’s a modern opiate of the masses and it is very useful for those driving the train. It’s fordism, it’s newspeak, and maybe it should be talked about. It’s the bleakest of prognosis. All you can do is laugh.”