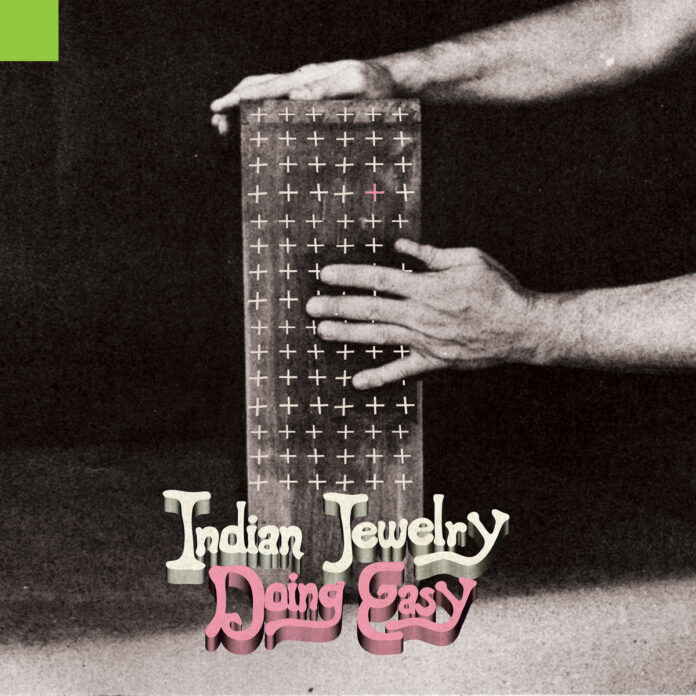 Experimental and visionary Texan psych heroes (they’ve been doing this long since “psych” became uber-hip) Indian Jewellery are gearing up to the release of their eighth album, Doing Easy, on September 1st via Studded Left. That, as the calendar conscious amongst you will have worked out already, is less than two weeks away, so a great time for them to release the video above which Louder Than War are thrilled to be introducing to the world today. Click play, hunker down, make damn sure you don’t accidentally navigate away from this page and get the fuck wonderfully lost in the world of Indian Jewellery.

Some of you probably don’t know Indian Jewellery. You’ll not be surprised to learn, though, that they’re favourites at the Austin Psych Festival (whose associated record label is releasing the vinyl edition of the new album) and are highly regarded in psych-rock circles thanks largely to a spell binding, coma inducing, wig out complementing, discombobulating live show which has sealed for them a reputation as a “not to be missed when they come to town” band. Fans of FFO’s and RIYL’s might like to be be told that they wouldn’t be out of place sharing a stage with the likes of White Hills or our own Mugstar in fact – oh, and what a gig that’d be, by the way!

Indian Jewellery’s music isn’t the deathly serious brand of psych-rock practised by many artists who fall into the category though, there’s a distinct playfulness, not to mention an ingenuous humour, at play with their music, which I guess is how they manage to wreak such havoc live – by “catching them unawares”. There’s a laid back bubbliness to Indian Jewellery’s sound, evident as much in the video above, Riding Cars Talking Trash, as in any of the other tracks on the album. Talking of the album, it’s a wonderfully varied beast, at times reminding one not only the bands mentioned above but of The Jesus and Mary in some places and Siouxsie and the Banshees in others. It’s also chockfull with interesting noises which help to make it stand out; bleeping noises, percussive noises and swirling noises amongst others. It’s an unsettling listen, indeed, always on the brink of ringing yet another change. So no danger of you getting bored after the third, fourth or fifth listen.

Oh – and all that talk about seeing them live? There’s a reason for that – they’re coming over to Europe very soon, so you’ll get a chance to experience their  live show for yourselves. The two UK shows are at Liverpool Psych Fest at London. There’s a wee promo video for the tour below, underneath which you can see the full list of live dates.

Doing Easy, the new album by Indian Jewellery, is now available for pre-sale at their Bandcamp on CD and digitally. (The patient amongst you might like to wait till the vinyl becomes available though in November, via Reverberation Appreciation Society).