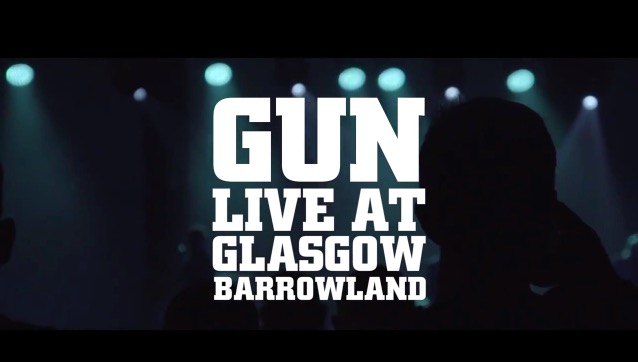 A couple of weeks ago we ran a gushing review of legendary Scottish rockers GUN’s Barrowland gig, written by one Harry Mulligan. The show was being recorded on the night and we’ve been given a stream of them playing the title track off their new album, which just so happens to be the new single too (release date 8th June), Frantic, above…

When GUN came home to the Glasgow’s Barrowland, a two minute walk from where Dante and Jools Gizzi Ma’s house was in Glasgow’s Carlton district of the East End, the denizens therein were anticipating their arrival. They hadn’t exactly left in a Skoda, but it was a Masarati Granturismo that they pulled in up by the Barras on Saturday, March 28th, 2015; sleek, feline and a bit menacing– like a cat.

It was their new album, ‘Frantic’ that they were test driving in reality and the Gig was a Balls-to-the-Wall-Stormer. However, don’t take my anecdotal evidence as Gospel. Here’s the prima facie evidence as documented on the night.

“Frantic was inspired by a meeting of artistic minds at SXSW Festival 1992, when Dante made the acquaintance of a highly renowned Hollywood actress/singer. Despite her turning up to one of GUN’s shows and spending the night with him talking about their hopes, dreams and aspirations, the couple crucially failed to stay in touch providing the album’s universal “what if” theme.”

Enjoy all you Rockers!