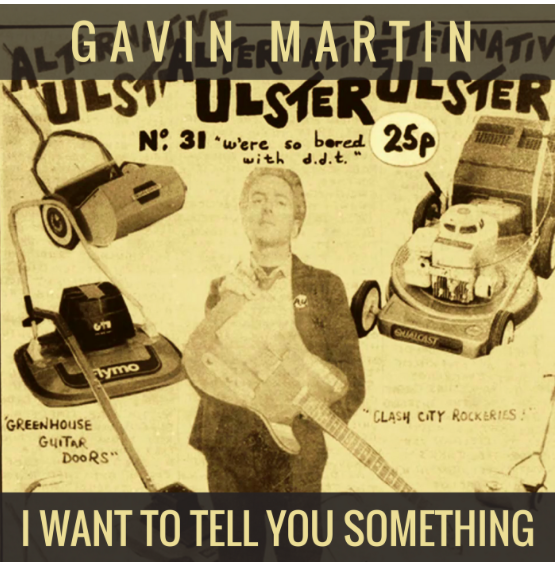 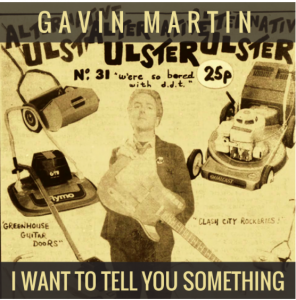 Music journalist Gavin Martin has switched codes in a late-career swerve that has seen him release a series of powerful and poignant songs about the dying art of rock n roll. These really are beautiful songs full of lyrical power and heartfelt sentiment – each one a gem.

Martin’s career began as a Bangor schoolboy when he published Northern Ireland punk fanzine Alternative Ulster in autumn 1977. An iconic Alternative Ulster cover features on the sleeve and video of Gavin’s new single I Want To Tell You Something.

Depicting late great Clash frontman  Joe Strummer surrounded by gardening tools the cover was a tribute to the cryptic gift – of a lawnmower – which Strummer sent to the fanzine after it ran Martin’s interview with The Clash, undertaken in The Europa Hotel during their ill fated October 1977 Belfast visit.

And he was talking about the lawnmower – not The Clash or Alternative Ulster.

Strummer is just one of several late great and living legends and departed music ‘weaklies’ referred to in I Want To Tell You Something – a survivor’s coming of age tale with a title conflating two of George Harrison’s finest Beatles era songs.

I Want To Tell You Something is the opening track on Talking Musical Revolutions an album who’s dream reception has included  8/10 from Classic Rock, ⅘ Stars in Record Collector and “Sorry Gavin not my thing, I’m afraid,” from John Mulvey, Editor Uncut Magazine.

Featuring the electrifying and dynamic Newcastle band Vito (stars of the recent ‘lets have a war with Trump’ Festival in Korea) the track is produced by Kelly Munro who also directs the accompanying video.

Centring a typically charismatic Martin performance, the video is further enhanced by archival cuts from the weekly music papers – Record Mirror, Melody Maker and Sounds – featured in the lyrics and Martin’s ‘stunning’  mouth movements – in no way disguised by the accompanying lyric read out.

Record Mirror, Melody Maker and Sounds…where are they buried?

And what on earth happened to Alternative Ulster’s Strummer Lawnmower?