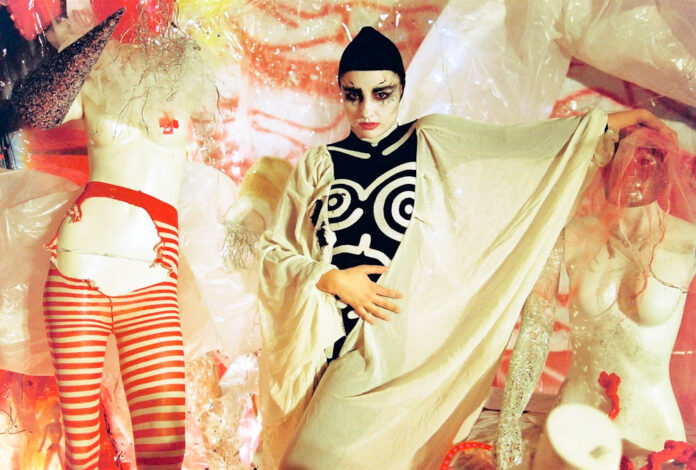 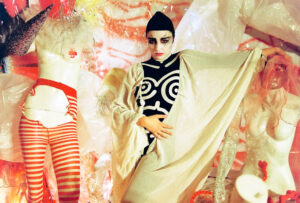 Mexican Summer are reissuing Geneva Jacuzzi’s 2010 debut, Lamaze, which had become a collector’s item among fans of offbeat pop.

It’s a full-length pressing of analog 4-track and 8-track recordings that documents the development of her musical style right from her first appearance in 2004 up to 2009.

The recordings from this period are largely electronic pop songs that are minimalist constructions with dance floor tempos that trot along around at about 100 BPM. Geneva was a Jehovah’s witness before moving into LA’s goth clubs bringing a staunch anti-establishment approach to her art, referencing avant-european theatre, new wave and left-field disco.

She is also sharing the Lamaze album track Clothes on the Bed as a single.

“It’s a plastic egg suspended over Venus – wreathed with orbits of layered synthesizer tones and a programmed jukebox teen-beat,” says Geneva. “It opens by startling itself, drops a thud too early, and then it pops like a bottle cap before it shuffles into a one-legged tempo. A chord enters setting off a bouncing electric rhythm – and with the limping beat – they curl into a somersaulting tempo that rolls us into the bedroom. Naturally, it’s accessorized with sound effects like pretty little electric vanities for the adolescent android clueless about what to do with all those clothes.

“It sounds like a Top-40 hit from the rubber city, Akron in 1980, but, it remembers that ‘50s escapism that everyone else forgets about that decade. It’s a teenybopper malt-shop ditty, a plastic egg dispensed from a holographic vending machine.”

She’s even unearthed the bonkers vintage video she shot  for Clothes on the Bed.

“I’m pretty sure my bedspread wrote this song because I have no idea what it means other than the obvious, but I suppose that’s why it makes sense to everyone but myself. We shot the video in the Tim and Eric studio in 2009. The director, Eric Fensler, did an amazing job with the set design and concept and the OG plan was to have it stay simple, but I snuck a smoke machine on set ,and convinced him to let me emerge from the closet as a succubus. It ended up making the cut and the vid is one of my faves to this day.”