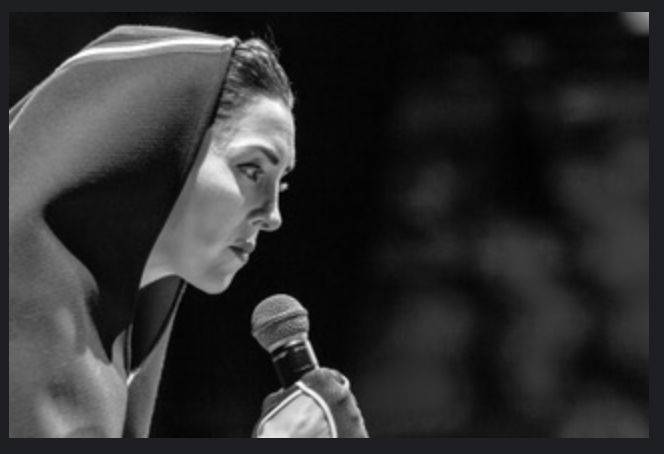 GAZELLE TWIN has been creating some mind blowing electronic landscapes in the past year. Truly groundbreaking music that combines drone electronics, pulsating atmospheres, treated vocals, off-kilter textures and almost deep classical and folk ideas into a new whole…really inspirational and thrilling and this new single, ‘The Well’ continues pushing the envelope.
TAKEN FROM THE POWER SOUNDTRACK, A COLLABORATION WITH MAX DE WARDENER. It’s OUT ON INVADA RECORDS – 8 APRIL 2021
Gazelle Twin has launched a brand new track, ‘The Well’, taken from the soundtrack for The Power, out digitally on 8 April 2021 via Invada Records (with a vinyl release to follow).
The film’s soundtrack, by Gazelle Twin (aka Elizabeth Bernholz) and composer Max de Wardener, has a digital release to coincide and physical formats will follow – both on Invada Records. The pair collaborate on all of the music except for ‘The Well’, a song written and recorded by Gazelle Twin (the first new “solo” music since 2018’s Pastoral) that fitted so perfectly with the atmosphere of the film, it had to be included!
Talking about the soundtrack, Gazelle Twin expands, “Working on The Power with Corinna and Max didn’t feel much like work. It was a long haul thrill, from our field trip to the derelict wing of Goodmayes Hospital to record squeaky trolleys and smashed pill bottles, to making countless experiments with samples, voice, and electronics, pushing them in every extreme direction we could think of. The results bring me a lot of joy. I hope the collaboration continues.”
Max de Wardener goes on to say, “For this score we tried to match Corinna’s terrifying vision of the dark by creating music that was both as ambiguous as it was frightening. Keeping the palette small to increase the feeling of claustrophobia, this ranged from quiet dusty out of focus sounds, to full blown dense vocal textures with pounding synths to evoke our primal fear of the unknown. Gazelle Twin’s brilliantly inventive approach to vocal music became such an important part of the film and it was a treat to work alongside her to make the score come to life.”.
Summoning the spirit of classic ghost stories such as Susan Hill’s novel The Woman in Black and the intense psychological atmosphere of Dario Argento’s Suspiria, The Power is set in a crumbling East London Royal Infirmary in 1974. The supernatural thriller, written and directed by BAFTA nominated British filmmaker Corinna Faith, will be available exclusively to stream on Shudder from 8 April 2021: https://youtu.be/0ZfRRB8XUNM