Home Music Bands Watch This! Football by Trust Fund < The Band Responsible For One... 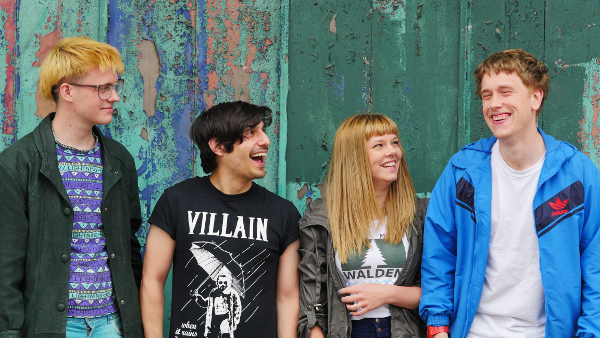 Like the snappy title suggests, Trust Fund have just dropped a video for a new single, Football, which is the vehicle via which they’re telling the world a new album’s in the offing, one which’ll fall nicely on the 2016 side of the Mercury Music Prize so they’ll probably be in both the 2015 and 2016 shortlists now we imagine (coz we’re so in tune with the jerks (no offence intended) who compile the MMP).

Trust Fund, aka Ellis Jones and friends, released a cracking album back in February. Titled No One’s Coming For Us we gave it a no messin’ 10 / 10 and frankly gushed about it with statements such as “indie pop masterclass”, “raw beauty coupled with flashes of pure power” and “a thoroughly brilliant record”, none of which, we assure you, were hyperbole.

Fast forward to today, the 9th October and looky here: a video for a new track from Trust Fund which we learn is off No One’s follow up, due out on October 30th and released once more through the ever excellent Turnstile Music.

Seems Unfair (for that is the title of said album not a random statement, altho now I think about it it does seem kinda unfair that one person can be quite so bloody talented and quite so bloody prolific with it – hmmm) is now available to pre-order from Trust Fund’s bandcamp page (LP and t-shirt) and / or iTunes and is described as…

“…retaining the vital excitement that made the debut release such a delight, whilst refining the pop sensibilities and never shying from the self-reflection and attention to detail that has already singled out Ellis Jones as a lyrical talent.”

Turing our attention to the video, created by fellow Bristolian James Hankins (equally as bloody talented and prolific as Ellis which also Seems Unfair) and Richard Edkins, it shows the band drifting off to sleep and in their dreams (which co-incidentally or spookily (take your pick) was the title of the recent Trust Fund single which featured Alanna McArdle, late of Joanna Gruesome and is also on this new album) and therein playing a game of football. And yes, there is more to it than that, I suggest you check out the video to find out what more. About Football (the game, not the musical track by the band Trust Fund) Ellis says…

“I feel so ambiguous about football and especially the kind of football that you can watch on TV, but I basically can’t deny how important it is to a lot of the relationships I have with people.”

The band also have a tour with Speedy Ortiz lined up, full dates for which can be found below the tracklist, and another tour lined up after that with fellow Bristol band Alimony Hustle (a two-piece, both of whom late of Empty Pools and also ace, natch. Proof thereof.)