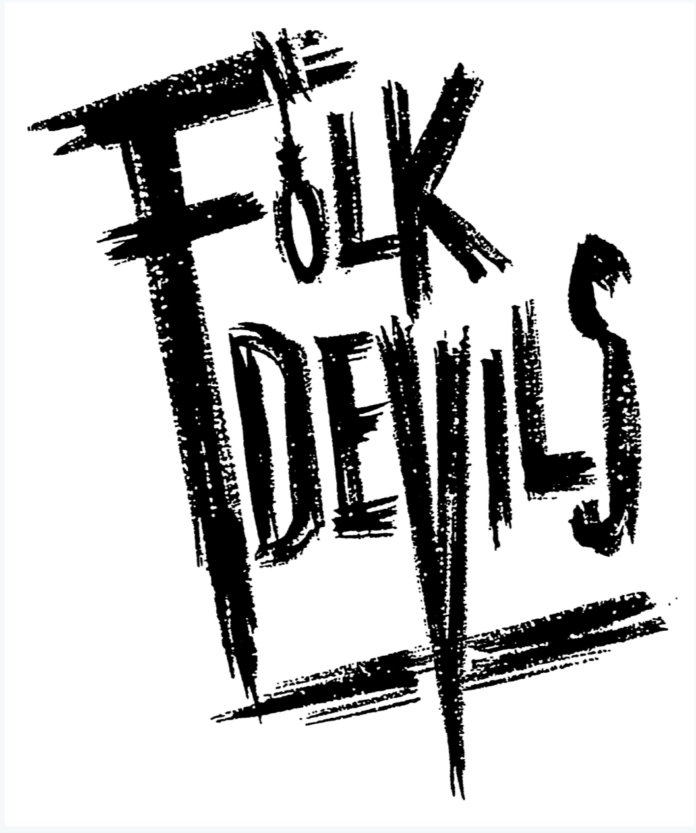 Spotify page: https://open.spotify.com/artist/5hkrgr79U7MWJzSBKNXIRY?si=_3aJRv0OQ_qTNf5OTU41pw
Bandcamp page: folkdevils.bandcamp.com
Facebook page: facebook.com/FolkDevilsUK
Optic Nerve mail-order: https://opticnerverecordings.com/collections/folk-devils
——————————————————————————————————————————————————————————————————————————-
The ‘Ink Runs Dry’ video was created by Folk Devils singer Dave Hodgson using inkblot CG graphics and live footage shot at The Dublin Castle in Camden, London.
FOLK DEVILS are about to unleash their first new music in over three decades with the ‘Forever’ EP, featuring two new songs “Forever” and “My Slum Soul” and an adrenalized new version of an old live favorite “Ink Runs Dry”. Early press responses, along with spins on BBC 6Music, BBC Cymru and dozens of regional rock shows, suggest that the mid-80s spirit that informed their ’80s recordings and incendiary live shows in alive and kicking harder than ever.
Hailing from the Ladbroke Grove scene that spawned Killing Joke and other malcontents, the group took their name from sociologist Stanley Cohen’s book on youth subculture Folk Devils and Moral Panics, and have returned with their first new music since 1987’s “The Best Protection” EP (Beggar’s Banquet). The band blazed a trail across the UK’s independent music scene of the mid-80s with their unique brand of post-punk energy. Initially managed and mentored by Ray Gange (The Clash, Rudeboy), they made their mark with their acclaimed indie-chart singles “Hank Turns Blue”, “Beautiful Monster”, three John Peel sessions, plus live dates opening for Nick Cave & The Bad Seeds, The Fall, The Gun Club, Screaming Blue Messiahs, Spacemen 3 and others. They were originally fronted by the highly underrated and now sadly-departed singer/songwriter Ian Lowery, who passed away in 2001. The 3-track “Forever” EP lands on 10” Vinyl, CD single and Digital on September 18th, 2020 via Optic Nerve Recordings. Recorded at London’s famous Konk Studios in North London and mixed and co-produced by Grammy Award-winning engineer Rik Simpson, the re-born Folk Devils drew inspiration for new recordings from the release of their 2016 career retrospective “Beautiful Monsters (Singles and Demo Recordings 1984-86)” and the excellent reactions at subsequent live shows around the UK with kindred spirits Membranes, Inca Babies and The Cravats.
Founder members, guitarist Kris Jozajtis and bassist Mark Whiteley, reformed the group by recruiting members of a short-lived 1987 version of Folk Devils; ex-Ski Patrol guitarist Nick Clift and drummer John Hamilton. Together with new singer Dave Hodgson they soon discovered they had created a well-oiled twin-guitar juggernaut that brimmed with the same restless, twisted blues that characterized the first and second iterations of the band from 1983-87. Hodgson, a fellow transplant from the North-East of England, had known Ian Lowery in the early 80s prior to Folk Devils, when the two were in their respective post-punk bands Ski Patrol and Parting Shots.