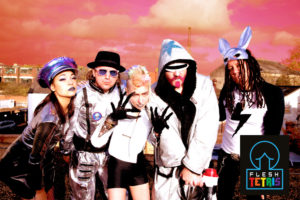 Taken from their forthcoming album, Wrong Kind of Adults, which is out on 10th May via Cargo Records.

Citing diverse influences including 10cc, B-52’s, Ian Dury & The Blockheads, Liars, Nina Hagen, X-Ray Spex, Sparks, Minty, Roxy Music and Death From Above 1979, Flesh Tetris combine earworms and brains alongside a healthy dose of silvery weirdness. Jailbait Sex Pest Infestation is about a gang of flirty underage cockroaches trying to crash a party. However the band are quick to add that the song is not a metaphor (it’s literally about cockroaches!), and was sparked by a misheard conversation between a toddler and his mother on public transport in the West End of the capital.

Flesh Tetris are Andy Heintz (vocals and synths), Eva Menon (vocals and synths), Karen Bell (vocals, synths, theramin), Andy Duke (bass and FX) and Jez Miller (drums). The five piece formed in 2017 when many of the members met, as Duke puts it, “At a Russ Meyer filmathon in London”, where Heintz’s Logan’s Run t-shirt sparked a conversation. Meanwhile, Heintz and Bell had already been introduced at a mutual friend, Tony’s, funeral. “One night there was a flash of light and Tony appeared,” says Bell, “and said ‘you must start kinky sci-fi band together’”. Heintz and Miller had played together in bands before (most recently The Men That Will Not Be Blamed For Nothing), as had Menon and Duke. The five friends bonded in pubs and on dancefloors across the following year before they inevitably found themselves in a rehearsal space, where they found their combined sonic skills opened portals into extremely odd dimensions.

1. It mustn’t sound like anyone else around
2. It has to be fun
3. No guitars = no guitar solos… let it be synth and FX driven
4. Boy /Girl vox … none of that shouty angry man stuff

Anyone who has attended one of the band’s infamous live shows will know just how effective a policy this has been. He explains further: “We wanted a human drummer as it gives the whole thing a more dynamic energy… like a cyborg as opposed to a robot,” he says. “The longer we’ve been together the camper it has become.”

The band’s debut album, which follows a low-key digital-only EP released in 2018, was produced by Brian O’Shaughnessy, who had handled recording duties on both Primal Scream’s classic ‘Screamadelica’, but also The Firm’s novelty 1980s smash ‘Star Trekin’. It’s not a huge leap to say the sound of Flesh Tetris lands somewhere between the two. “It’s a cliche but we wanted an accurate representation of Flesh Tetris’s live sound” says Duke of the album, “Big, Dynamic, Quirky, Melodic and Fun with a dark underbelly.”