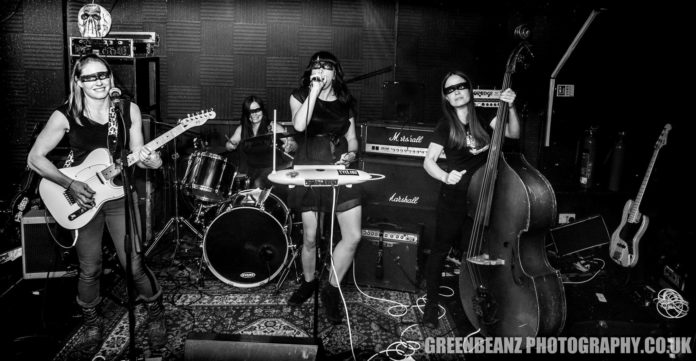 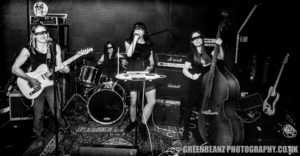 Those Cornish pyscho rockabilly garage quartet The Eyelids, have given LTW the honour of premiering their new video, Sea Of Trees. Mark Ray reports for Louder Than War.

‘Sea Of Trees’ is taken from the CD ‘Galigantus’, a compilation of Cornish rock, punk and metal bands covering each other’s music, created with the help of young people on realideas.org Game Changer BBO programme. LTW reviewed it here.

The Eyelids, who have been thumping up a rockin’ storm for over ten years now, covered Monolithian’s ‘Sea Of Trees’, giving a dark metal song a cool psychobilly sound with a twist of creepy horror.

The Eyelids last album, Cosmic Dust, was reviewed by LTW in 2017 and we have always supported and been admirers of their talent, so it’s great to get the exclusive premiere for this new video. They perform regularly in Cornwall and have supported Imelda May, The Damned, Stiff Little Fingers and Pussy Riot.

The lyric video is produced by Michelle Fowler, and Sea Of Trees was recorded and produced by Jimmers Thomas.