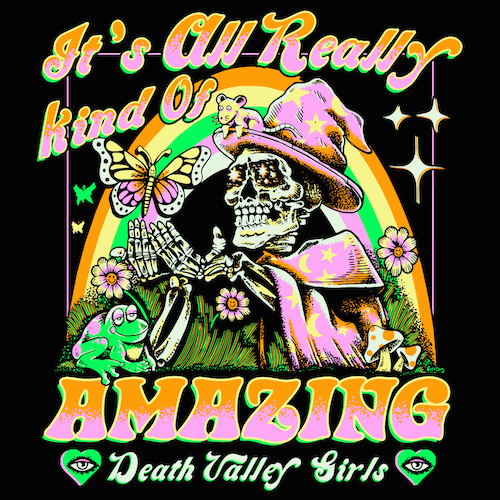 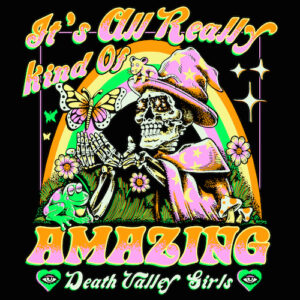 It’s All Really Kind Of Amazing

Death Valley Girls sound like something from the Sixties, probably concocted in an acid-fuelled haze deep in the Mojave Desert. But they’re right here right now.

If you can judge a book by the cover (and I recommend it: it’s a foolproof method) then you can usually judge a band by its name. And its song titles, videos, clothes, iconography, record label, etc.

So in the case of Death Valley Girls, who are signed to indie label Suicide Squeeze Records, you hardly need telling that they come from Los Angeles, or that they describe themselves as “a dystopian punk band.”

Of course they do.

Here’s the video for their latest tune, It’s All Really Kind Of Amazing. And it is. And it would have been back in 1967, which is when it sounds as if it was recorded, with a video by Bradley Hale that ramps up the retro references with lettering using the kind of fonts that usually come attached to records about flower power.

The band’s Bonnie Bloomgarden – of course – speaks of the song in the same sort of terms, filtered through a life led in Southern California. “Being in a body, experiencing reality as a human, is endlessly challenging. There’s so much darkness, suffering, sorrow, and division, it’s hard to get past. Sometimes, and often for too long, I just stay in the darkness, forgetting there’s anything else. And then sometimes, my guides remind me to look around, sometimes, just look around, at this Earth, at its infinite beauty and intricacy, and simplicity, and sometimes I can feel it, that it’s all really kind of amazing.” 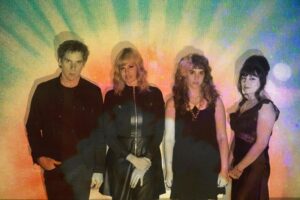 Or, to put it another way: in these tumultuous times, it’s easy to forget that our natural state isn’t meant to involve chronic anxiety, fear, depression, or boredom. We all could use a reminder that our default setting as human beings should be one of hope, wonder, and love.

Death Valley Girls’ ongoing mission is to use their scorching blend of garage punk, communal music, fiery riffage and desert psychedelia as a vehicle for reconfiguring our perception and tapping into the beauty of the human experience.

Further bolstered by Rikki Styxx on drums, Emily Retsas on bass, and the gang vocals of Little Ghost, Pickle, and Kelsey Whatever NBD, the newest entry into the Death Valley Girls songbook exudes the aura of a tight-knit collective in the throes of ecstasy.

“We are streams of eternal consciousness experiencing reality through our personal lens,” Bloomgarden says of the song’s intention. “And we have been programmed and have forgotten we are gods because of trauma, capitalism, and religion. So this song is a call to wake up! To remember you are magic! Abundance is the normal state… look for the signs from your guides and your higher self.”