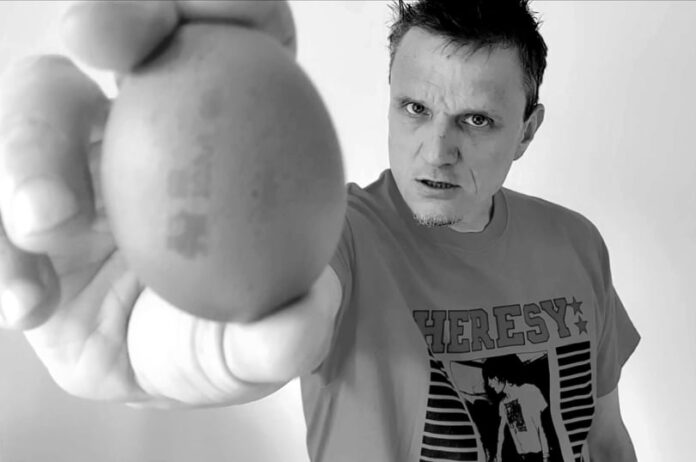 Paul Catten (“or should I call you Dead?” interview here) is back in full fury to have a rant at the Government yet again. This time he’s gone all rock on our pale skinny arses, which is his roots anyway to be honest after years of touring with hardcore bands pre Dead Sheeran. He’s as caustic as ever, angry as fuck and laying down (we hope) the foundations to the follow up to his mighty (almost) debut album reviewed here by our loveable rogue Ged Babey. Dead (or Paul) explains the venting of his spleen…

“To be honest, I wasn’t fussed about doing any more DS stuff. I rarely make more than 2 records by the same artist, plus lockdown 3 was a struggle. Like many others, my mental health suffered (as it has done throughout life) and any remaining enthusiasm for the project disappeared. Besides this was just a thing to do during the lockdowns really.

These 2 tracks were in their infancy around then, and it was a push to get back to it. I hadn’t listened to them for many weeks, and when I did I felt the urge to at least attempt to finish them. Problem was, something was missing this time. The songs were fast, and what I needed was….guitar. Not to change direction, but to make the songs sound as good as they could. As fate would have it, I heard from my partner in crime over the last 20 years, Mark Seddon. As usual, we hadn’t spoke for 2 years and he rocks up at mine for a cup of tea. 30 minutes later, we’re in the studio smashing the guitar parts.

The songs? Standard, I revised the lyrics to bring them up to date for a start.

World Beating – that fucking phrase, all the way though this bullshit. Sick of it. And people still believe it. What a state. They truly are a world beating bunch of bastards.

Brexit Beach Party – just that scenario of Patel, Gove, Farage and the rest of those cunts on the beach, claiming to be fighting for the British way of life. They are a disgrace. A bunch of racists, and again people remain conned by them. Brexit has been a disaster, we knew it. Its what happens next that’s even more frightening, because it’s going to get worse.

There’s some new songs heading out over the next few months. Singles only. No albums for a while.

These tracks are the best so far, and I still have a lot to say, I might as well exhaust this anger before doing something else.

Book me for a gig. Let’s spread this anti-government propaganda around a bit more.”

No album for a while? Fuck off mate! We need another gem of funny as fuck social observation from a master who should be collaborating with Sleaford Mods! Jason and Andrew take note! He’s your brother from another mother!