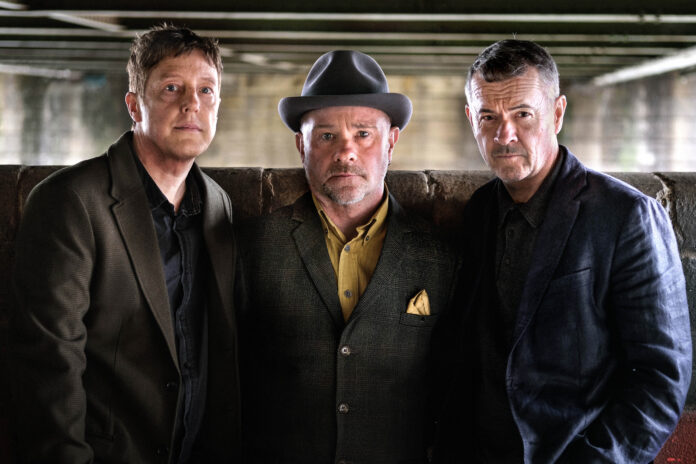 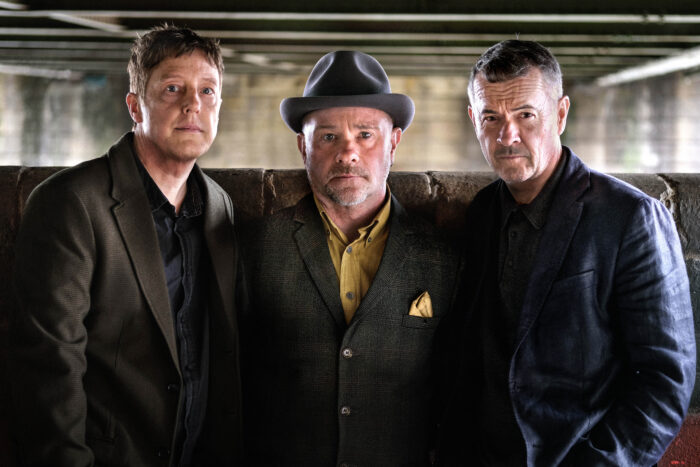 Proclaimed by Morrissey as “heirs to the Smiths’ throne”, Bradford are back with a new single and video for My Wet Face taken from their forthcoming album, Bright Hours to be released 19th February.

With a new look line-up on illuminating form, as a trio Bradford have lovingly crafted new album: Bright Hours to be released next month (on the Foundation II label). The latest single from the album, My Wet Face, is out on all streaming services now.

Bradford are a revered indie band formed in Blackburn in 1988 and their line-up consisted of Ian H. (vocals), Ewan Butler (guitar), John Baulcombe (Keyboards), Jos Murphy (bass guitar), and Mark McVitie (drums). Touring with the likes of Joe Strummer, The Sugarcubes, Morrissey and more, the band burned brightly and brilliantly. Fading away with the neon glow of the Madchester era, the band split in 1991.

Skin Storm was the band’s debut single released in 1988 before they met producer Stephen Street at a Smiths gig in Wolverhampton ‘88 where he signed them to his Foundation label. The band earned a cult status with their acclaimed debut album Shouting Quietly in 1990, a record as produced at the time by Street. Street then produced a major share of Bradford’s material during their two-year relationship.

With a production career that famously umbrellas Blur, Smiths, Babyshambles, Kaiser Chiefs, New Order, Catatonia, and Suede (seriously look it up), Street has joined two of Bradford’s founding members (Ian and Ewan) for Bright Hours as their third and final member. With a rekindling of belief slowly re-ignited the magic and chemistry that always existed between the band (now just Ian H and Ewan Butler), Street decided to join forces with them and become a fully-fledged member of the band.

“Who?” Ian smiles when I ask why the other original members of Bradford aren’t involved. “To expect essentially five opinionated and stubborn men to travel on similar trajectories over three decades is pushing it a bit! Emotionally and logistically it’s impossible to have those five guys in a room together again playing music”

Ewan continues, “I would echo Ian on this, although I would look to frame it in a slightly more empathic way. We had our moment together and it was like spending four years on the Big One at Blackpool”

With their relationship still remaining strong after all those years, getting Street in the band wasn’t a difficult step.

“We’d all three remained in contact over the period of almost three decades,” Ewan expresses. “Ian and I had been recording in my studio and we had a decent amount of material and the songs were all very strong. However, I wasn’t keen on mixing them due to a less than favourable acoustic environment at home, so I initially asked Stephen whether he could recommend anyone. He was curious about the work we’d done and was keen to hear the songs.

It was at that point that we decided to take a punt and asked him if he would like to come in on the project, become a full member of the band, and much to our delight he agreed.”

Ian explains that the relationship between him and Ewan has also remained strong, “…like Janine and Nigel in Spinal Tap there is ‘great love’ between us and we are ‘so alike in many ways’. Look I’m a Northern bloke and its bloody ‘ard to come right out and say “I love Ewan” – but I do – he ain’t heavy – he’s my brother.”

Street is based in Damon Albarn’s studio complex in West London and it is where all the mixing was done for Bright Hours. With the album recorded and produced prior to lock down, the band claim that luckily no musical sacrifices had to be made throughout the recording process.

“Shouting Quietly was recorded and mixed in just three weeks in deepest Wales, with Stephen working his socks off – I love the record for all kinds of reasons and still think it sounds strong. Bright Hours is far, far, stronger. Of course, it’s my voice, which I’m told has improved with age, which gives both records a consistency but musically, sonically, ideas wise, arrangement wise, song wise, production wise, Bright Hours shines and rings in a rather satisfying and dare I say it, glorious way”

Inspired in-passing by Ian’s late mother who died of dementia “and didn’t even recognise me or my sister or my father in her final two years on earth”; new single My Wet Face provides a potent pause for thought on the fragility of the human mind and memories we come to treasure.”

A simple song about complex emotions and one that Ian claims ‘blurted’ out of him, the front-man explains,

“My Wet Face is an ‘up’ song dealing with a ‘down’ subject – the essential existential dilemma that absolutely nothing material can be held onto in any meaningful way. It’s about the pain of life where essentially our memory is the only thing that can comfort us with recollections of beautiful moments, or even painful ones which have been somewhat assuaged by the passing of time.

I’m hoping the lyric is self-explanatory – the more life you live, the less you have in front of you. Memory is all we have, and memory is unreliable, capricious and extremely limited.”

With normal life still seeing a thousand years away, seeing Bradford on tour playing this new single and their new album almost seems out of the question for now. With a nostalgic sound and a fascinating new line-up, let’s hope that the new trio will be out on tour soon. Now, can anyone lend them a drummer?

Here at Louder Than War you can get an exclusive listen to their new single and look at their new video. You can also check our preview of their last single, Like Water, here.

All words by Jasmine Hodge. More writing by Jasmine can be found at her author’s archive. Jasmine is also on twitter as @ObviouslyItsJaz