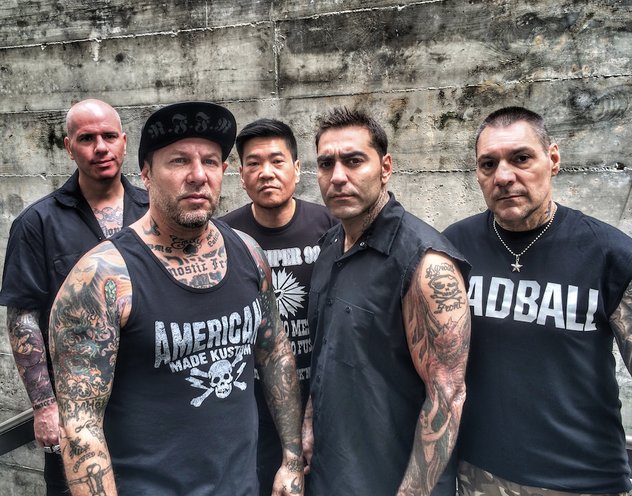 Genre defining hardcore heroes Agnostic Front have just released a new album, The American Dream Died, on Nuclear Blast and we’re stoked to have the first play of the latest video off it for you today – check out Never Walk Alone above.

Despite The American Dream Died being the band’s 11th album in a 30 year career it still feels like a coruscating blast of fresh air, not to mention a call to arms, from a band who are committed to their scene and the people who’re part of it. While many of their early days contemporaries – Minor Threat, Ssd, Dead Kennedys etc – have disappeared, Agnostic Front are still with us, proving that hardcore can be – and should be – “for life”. A conclusion we also reached when last we reviewed Agnostic Front live back in 2012.

As an older hardcore fan it’s always confused me why so few fans of the genre stay so past their 21st birthday. Far too often when I go to a hardcore show I find myself in a room full of kids a fraction of my age, and with the hardcore genre in rude health (look at the success of the Outbreak, Ghostfest and Concrete festivals for proof thereof) at the moment I really don’t get it. Granted, it’s far more likely you’ll be kicked in the head by someone spin kicking for England at a hardcore show than at any other kind of gig, but that’s no reason not to go! Hec, some of us would say it’s things like that that get the adrenalin flowing (almost as much as the music does on its own) and make hardcore shows so great! But I digress – essentially what I’m saying is that this new track by Agnostic Front – as well as their continued existence, should be considered a timely reminder that those who’ve deserted the genre should come back to the fold, and that those of us who’ve stuck with it were right all along!

“Myself and the band has never felt so confident and passionate about a release, it’s full of anger, rage and honesty; all the makings of a classic! The session was really intense and the results show it all!”

So yeah, buy this record here: bit.ly/TADDAmzCD and while listening to it brush up on your two-step moshing, wall slamming and floor punching then just get out there. Birmingham’s Concrete Festival‘s only three weeks away, Ghostfest‘s in September (Leeds and Bristol) and although you’ve just missed this year’s Outbreak there’ll be another next year I hope!