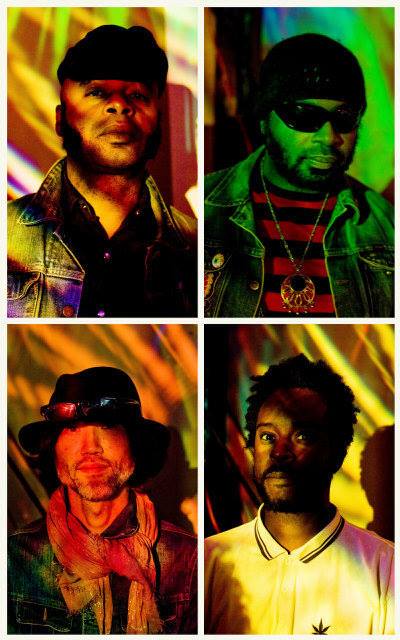 We are pleased to present a double premiere from iconic shoegaze-alternative indie-soul rockers The Veldt – Here we have their new EP ‘The Shocking Fuzz Of Your Electric Fur’, which gets its worldwide release June 2 via Schoolkids Records (Raleigh, NC – Dublin, Ireland). We also have a spanking brand new video for their seductive chillout track ‘One Day Out of Life’ (Mahogany Remix).

About the latter, the remix was produced by Andrew Prinz of Mahogany. The video was created by NiiLartey De Osu for MediaGroup 23 (he is also head of the New York-based fashion company Neodandi House of Couture, a key design industry competitor of Comme des Garcons). In ‘One Day Out of Life’, which features Mani De Osu, NiiLartey proves that he is indeed on the same wavelength of his former schoolmates Daniel and Danny Chavis of The Veldt.

“The concept behind the new video is NeoIllusion, an artistic movement seeking to unite spirit and form as a unifying vision of experience and presence, and to create a visual representation of memory by focusing on the interaction of what we see and what we remember,” explains NiiLartey De Osu. “In this case, the idea is that, wherever you go and wherever you are, you reveal many forms of yourself and these forms are recorded in the memory of a loved one”.

It was not long ago that Pitchfork included The Veldt’s seminal album ‘Afrodisiac’ in their list of the top 50 shoegaze albums ever released. Since their 1992 debut album ‘Marigolds’, they have inspired many alternative artists, including TV On the Radio and a whole new generation of shoegazers in this current shoegaze revival upsurge. That’s not all either, even Doc McKinney, famed producer of The Weeknd and Drake, was inspired by them. He says, “For black artists, doing anything outside of the bubble, beyond what’s derivative of what white kids are doing, being able to express yourself honestly, is not celebrated at all. So when I heard these guys, it gave me confidence”.

The band’s history reads like a ‘Who’s Who’ of shoegaze and alternative rock. On the one side, there is a slew of dreampop/ shoegaze royalty, having been produced by Robin Guthrie (Cocteau Twins), Lincoln Fong (Moose), and Ray Shulman (The Sundays, Bjork, Sugarcubes) and toured with the Cocteaus, Slowdive and The Jesus and Mary Chain. On the indie rock side, they have also collaborated with TV On The Radio, Mos Def and Lady Miss Kier (Deee-Lite), and shared the stage with The Pixies, Throwing Muses, Echo & The Bunnymen, Manic Street Preachers, Oasis, Chuck D, Living Colour, and Schooly D.

OK enough of the accolades. Or maybe not – after all, they massively deserve them.

After their successful 7” single ‘Symmetry / Slow Grind’, released in April, The Veldt are releasing ‘The Shocking Fuzz of Your Electric Fur’, a five-track offering that involves A.R.Kane on the final track ‘And It’s You’. The band has traded quick beat rocking out for down tempo hip-hop beats and turned them into masterpieces in the same way that Massive Attack did with ‘Mezzanine’. But here we also find a solid connection with the band’s roots, with influences by Marvin Gaye and free jazz warriors Sun Ra evident amidst all the guitar distortion and more modern instruments. This new EP is nothing short of amazing – pure bliss, sonic harmony and depth rolled in with Daniel Chavis’ sweet falsettos, rad beats and perfect layers of guitar.

This year has seen The Veldt catapulted back into the indie music trajectory in a way that is rather monumental. From a sold-out tour with The Brian Jonestown Massacre to a sold-out with Phantogram, a European tour, two Canadian tours, appearance at a handful of psych fests, a spotlight feature on Time Warner Cable TV and then being named as east coast support for Modern English – this past 13 months has been highly impressive. Do catch them on tour in the US while you can (UK tour dates planned for late 2017).

The Veldt is on Bandcamp at https://theveldtmusic.bandcamp.com. They can be followed on Twitter as @VeldtThe and Liked on Facebook.